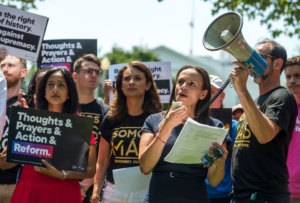 WASHINGTON – Voto Latino, The Leadership Conference on Civil and Human Rights, MoveOn, the Service Employees International Union, Labor Council For Latin American Advancement, and American Federation of Teachers hosted a joint rally with a coalition of national civil rights and gun violence prevention groups on Tuesday, August 6 at 12:00 PM ET at Lafayette Square in Washington, D.C. The groups demanded that Donald Trump ceases his racist, violence-inducing attacks on the Latinos, immigrants and communities of color, and urge the Senate to pass H.R. 8, a Bipartisan Background Checks Act already passed by the House.

“The number of mass shootings in America in 2019 is currently set to outpace the number of days this year, reaching 251 as of Sunday, with more than 100 people shot in the last week alone. Many of these attacks — from El Paso and the Tree of Life Synagogue in Pittsburgh to the Kroger parking lot in Kentucky and Pulse nightclub in Orlando — are a direct result of poisonous white supremacist ideology stoked by this president”, said the organization. “The El Paso massacre was the second deadliest attack carried out by a white supremacist since the Oklahoma City bombing.”

This weekend’s tragedy marks the largest slaughter of Latinos by gunfire in a domestic hate-based incident in modern U.S. history. The attacks in El Paso, Texas, and Dayton, Ohio killed more Americans in 24 hours than the number of American troops killed in Afghanistan in 2017 and 2018 combined. Earlier in the same week, the Gilroy Garlic Festival rampage took the lives of three innocent young people, including a 6-year-old boy.

The organization states that the impact of Trump’s racist rhetoric and policies cannot be ignored when white supremacists— many of whom name him in their attacks and cite him in their hate manifestos— murder innocent people of color. It is not enough for Republican leadership in Congress to offer thoughts and prayers, nor should they repeatedly blame gun violence on mental illness—an unfounded and harmful trope. They must unequivocally denounce this violence, pass laws to stop it and prevent the rise of white supremacy.