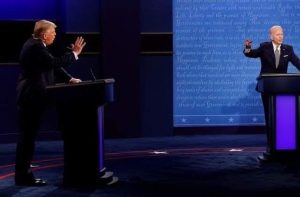 President Donald Trump and his Democratic challenger, Joe Biden, squared off in their final debate Thursday.

The debate exchange followed the recent news reports of past communications between Joe Biden’s son, Hunter, and his business partners that have raised questions about what Joe Biden knew about these foreign business dealings.

Trump is asked how he will reunite the 500-plus kids who remain separated from their parents.

“We’re trying very hard on that,” the president says. Trump said the infamous cages at the border were built during the Obama-Biden administration.

Biden is asked about the Obama-Biden administration’s failure to pass immigration reform. He acknowledges it took too long to get it right. He promises a plan for a pathway to citizenship for “Dreamers” in his first 100 days if he’s elected.

The candidates have been asked about Obamacare and the upcoming Supreme Court case that could scrap it. Trump talks up, ending Obamacare’s individual mandate, saying that was its “worst part.” He also claims Biden wants to terminate 80 million or 100 million insurance plans. Biden says he supports private insurance and makes a reference to “Bidencare” as he talks about his proposal to build on Obamacare and offer a public option.

The Commission on Presidential Debates announced changes to the debate rules ahead of Thursday’s final presidential debate.

Under the new rules, President Trump and Democratic presidential nominee Joe Biden will each have two minutes of uninterrupted time to speak at the beginning of every 15-minute segment of the debate.

“The only candidate whose microphone will be open during these two-minute periods is the candidate who has the floor under the rules,” the commission announced. After that, there will be time for discussion with both candidates’ microphones open.

The commission says both campaigns have agreed to the two-minute, uninterrupted rule.

Less than two weeks before the election Nov. 3, Democratic presidential nominee Joe Biden leads President Donald Trump by 7 percentage points in the battleground state of Pennsylvania, according to a USA TODAY/Suffolk University poll.

Democratic presidential candidate Joe Biden appeared to take the lead over President Donald Trump in Florida, where the race had been a statistical tie a week earlier, Reuters/Ipsos opinion polls showed on Wednesday.

The poll also showed the two candidates to be neck and neck in Arizona.

Reuters/Ipsos is polling likely voters in six states – Wisconsin, Pennsylvania, Michigan, North Carolina, Florida, and Arizona – that will play critical roles in deciding whether Trump wins a second term in office or if Biden ousts him.