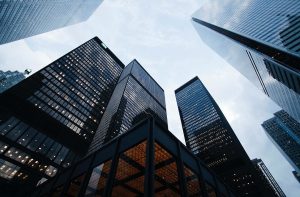 A fifth of the world’s biggest companies have committed to reaching net-zero carbon emissions, according to an analysis by the Energy and Climate Intelligence Unit, and a large portion of those emissions come from the workplace.

In recent years the emission-cutting plans of major publicly-listed companies have received an increasing amount of attention. Much of this focuses on companies’ targets for net zero emissions, which is now the dominant framing that many corporate and public sector entities use for decarbonization pledges and plans.

By comparison, the plans of major private companies receive very little attention. But private companies, accountable only to their owners, and with less regulatory scrutiny and oversight, make up a large share of the world economy: the aggregate annual revenue of the 100 largest private companies in the world amounts to over $4 trillion, almost 5% of the global economy.

Data on the world’s biggest 100 publicly-listed companies were drawn from the Net Zero Tracker database.

On almost all net zero quantity and quality metrics we investigated, it was determined that private companies are trailing their public counterparts.

Less than half as many have set net-zero targets (32 of the top 100 private firms compared with 69 of the top 100 publicly-listed companies). Of those that have set a net zero target, only 13% (4) have published a plan to reach it, versus 73% (50) of their publicly-listed counterparts. The private companies that have set a net zero target are less likely to include Scope 3 emissions within it, are less likely to have set interim targets, and give less clarity on their planned use of offsets.

The situation is even more concerning when considered in the context of other findings by the Net Zero Tracker and others showing that overall, while corporate target-setting continues at speed, the targets of publicly-listed companies themselves show insufficient rigor and integrity.

In short, the lack of integrity of the largest private firms’ net zero pledges is a $4.3 trillion blind spot that will likely gain much greater interest in the coming years.