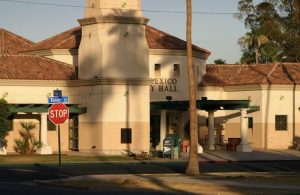 The California State Auditor’s Office found many deficiencies in the City of Calexico’s finances which will have to be resolved as soon as possible.

The City acknowledged that it has faced financial challenges over the last decade and appreciates the work the State Auditors have put into identifying areas that need the most immediate attention.

“The city of Calexico has acknowledged the findings that were prepared in the report. We understand that we need to update impact fee studies, and water, and sewer studies. We understand that we have a lot of deficiencies but all we can do right now is use this report as a guide to moving forward to the future,” Calexico City Manager Esperanza Colio told Beyond Borders Gazette on Oct. 26.

Colio said that at the Nov. 2nd Calexico City Council meeting she will present the most significant findings and a preliminary plan of how can they use funds to hire consultants to help develop policies. She is hoping that they can complete the plan by the Dec. 19 deadline and comply with all the findings by January 2023.

“It’s a hard deadline because we don’t have sufficient personnel but we will work with the consultants to produce that plan,” Colio said.

The report stated that for several years, the city council approved spending despite indications that the city’s budgets were based on unreliable financial data.

As a result, the city’s general fund was in a deficit from fiscal years 2014–15 through 2018–19. Since then, Calexico has maintained a positive fund balance in its general fund.

However, its reserves are below the minimum level recommended mitigating the risks of revenue shortfalls and unanticipated expenditures.

“Calexico also has inadequate processes for allocating the resources it requires to operate efficiently and identifying how it will generate sufficient revenue. For example, to sustain existing operations over the next four fiscal years, the city projects that it must generate additional revenue of up to $1.3 million annually, yet it lacks a plan for doing so,” the report added.

The city has not addressed known administrative deficiencies that prevent the public from benefiting from some funding. Because of its past mismanagement of housing grants, Calexico is prohibited from using more than $780,000 in federal pandemic-related grant funds it was recently awarded.

“The California Department of Housing and Community Development has repeatedly notified the city of grant mismanagement findings since 2014, but past city management did not disclose to the city council the unresolved status of those findings, obscuring the urgent need to address them,” the report read.

“During the past decade, ill-advised decisions created a financial crisis that continues to affect Calexico. For several years, the city overspent because its city council approved spending despite indications that the city’s budgets were based on unreliable financial data. As a result, the city’s general fund was in a deficit from fiscal years 2014–15 through 2018–19,” read the report.

Calexico has taken some steps to improve its financial condition. For example, in June 2016 it loaned $3.5 million from its wastewater fund to its general fund and began reducing expenditures to address the general fund’s deficit. It has since paid off the loan, and it has restored and maintained a positive fund balance in its general fund since the fiscal year 2019–20. However, the city has not adopted certain policies that could help it avoid making future budget decisions based on inaccurate or incomplete financial data.

However, the city’s history suggests that this level of reserves may not be sufficient and that it requires further analysis. In addition, the city has forgone potential revenue by not regularly updating the fees it charges for city services, some of which may no longer fully cover the city’s cost to provide services.

Among the recommendations made by the audit report, to reduce barriers to civic engagement, the council should consider encouraging or requiring all municipal governments to make key portions of public budgetary documents, such as proposed and adopted budgets, available in a sufficient number of languages to ensure that at least 75 percent of their residents can obtain the documents in their primary languages.

To ensure that the city has sufficient unrestricted reserves in its general fund to adequately mitigate risks posed by revenue shortfalls and unanticipated expenditures, by January 2023 it should analyze to determine whether the minimum level of reserves established in its current policy is sufficient and, if not, it should revise its policy to reflect a more prudent level.

To make clear when it should use general fund reserves and how it will maintain the appropriate general fund reserves level, by January 2023 the city should amend its reserves policy to define conditions warranting such use and to specify how the reserves should be replenished and when the balance drops below the level prescribed.

To ensure that it has sufficient liquidity to meet disbursement requirements throughout the year, before adopting its fiscal year 2023–24 budget, the city should forecast its cash needs throughout the fiscal year and maintain a sufficient level of cash assets in the general fund to pay for that fund’s expenditures as they occur.