In recent years a nationalist wave has hit every corner of the Earth. Different leaders in Europe, the Americas, and other places have won elections on a nationalistic, anti-foreigner platform. Claiming that it is necessary to focus on internal problems, to abandon external influences and/or to protect local jobs, their political movements have raised the nationalist flag and repudiated globalism.

It is understandable for many people to believe that globalizing forces have affected negatively their way of life: they’ve lost jobs that have gone somewhere else; they now encounter more immigrants—with different cultures and looks—in their cities and towns; and they feel that they’ve had to pay the price (militarily or economically) for things that happen well beyond their borders.

But, as many serious studies have confirmed, globalism (which implies international governance mechanisms, globalization and mostly-free international markets) has also been the origin of very positive things: people can now buy cheap imported products from all over the world, which undoubtedly raises their standards of living; technology is better shared and adopted in a globalized system; information and individuals move faster than ever with the availability of international communication services… 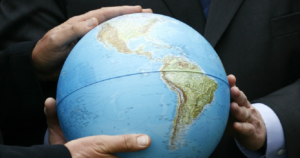 I once had the opportunity to ask Carlos Gutierrez, who was U.S. Secretary of the Treasury during the George W. Bush presidency, why it is so complicated to convince the general public that globalization and international trade are beneficial. And he answered something like this:

“It’s really easy to see when globalization damages you (as in the case of losing your job due to an industry leaving your town to find cheaper labor), but its positive aspects are harder to grasp: lower prices as well as better and more varied products and services; access to information and newer technologies… all that is not consciously attributed to globalization, but it is definitely an essential cause of such benefits”.

Besides, there is one aspect of globalism that nationalism will never be able to compete with: its capacity to solve the world’s problems. Most of the challenges faced by humanity today are either regional or global. Climate change, terrorism, nuclear proliferation, financial and economic stability, the consequences of the development of artificial intelligence and bioengineering… all of those are issues that transcend borders. We will need regional and global answers for them, and zealous nationalistic attitudes will only make it harder to find the needed solutions.

Of course, that patriotism, tribal feelings and religion won’t disappear overnight, and they don’t have to. They are generally a positive force when they are not taken to extremes. And governments have to do a much better job in protecting those affected by globalist trends (expanding retraining programs and unemployment insurance). But I don’t see how protectionist or xenophobic agendas will lead to better standards of living within countries and much less to help avoid or counter the calamities—ecological and technological—that the future might bring to us, humans.

Therefore, I firmly believe that we need to focus on building a more integrated world through regional and global institutions and civil society networks. Diplomacy must rule over aggression. Understanding has to win over rejection. Cooperation will need to prevail over alienation and disengagement. I am sure that all of this will happen. If not out of conviction soon, out of necessity in an even more urgent time.