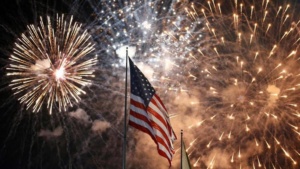 The United States celebrated another birthday in the middle of a global pandemic and social unrest.

The fireworks might light up the skies in many parts of the country but this year’s celebration was different. The COVID-19 pandemic made it almost impacted people to gather for a barbecue or go to the beach due to the rise of positive cases in recent days.

But the celebration continued.

Some cities around the country had fireworks and others traveled to enjoy with the family while taking precautions.

Independence Day is a holiday in the United States commemorating the Declaration of Independence of the United States, on July 4, 1776. The Continental Congress declared that the thirteen American colonies were no longer subject (and subordinate) to the monarch of Britain, King George III, and were now united, free, and independent states. The Congress had voted to declare independence two days earlier, on July 2, but it was not declared until July 4.

By a remarkable coincidence, Thomas Jefferson and John Adams, the only two signatories of the Declaration of Independence later to serve as presidents of the United States, both died on the same day: July 4, 1826, which was the 50th anniversary of the Declaration, Jefferson even mentioning the fact. Only one other signatory, Charles Carroll of Carrollton, survived them, dying in 1832. Although not a signatory of the Declaration of Independence, James Monroe, another Founding Father who was elected as president, also died on July 4, 1831. He was the third President who died on the anniversary of independence. Calvin Coolidge, the 30th president, was born on July 4, 1872; so far he is the only U.S. president to have been born on Independence Day.