The Weasel’s Tale Brings an Amazing Cast Together 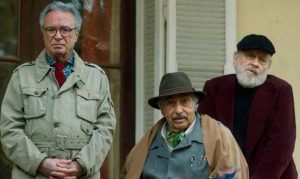 Oscar Winner Juan Jose Campanella’s “The Weasel’s Tale,” will have its premiere on Dec. 11 but people will be able to part of a question and answer session with the director.

Registration is required for this free Zoom event (sign in from anywhere in the world) at https://us02web.zoom.us/webinar/register/WN_EhkRS8HKSyqvFz5HcgUr9A.

The story of a group of four long-time friends, including a beautiful actress from cinema’s golden age, an actor in the twilight of his life, a frustrated scriptwriter, and an old director, will do the impossible to try and preserve the world they have created in an old mansion in the countryside outside Buenos Aires. When faced with the threat of a young couple who could put everything in danger, financial gain, seduction, betrayal, and memories run amok to create the recipe for this delightful game of cat…and weasel.

Juan Jose Campanella is an Internationally-acclaimed Argentinian director and writer for cinema and television. He usually produces and edits most of his films. Much of his career has been spent in the US, working on successful TV series such as Law and Order: Special Victim Unit, House, and 30 Rock. He directed the first season of Colony and was executive producer for the second season.

In Argentina, he produced several feature films that won multiple awards, including El mismo amor, la misma lluvia (1999), El hijo de la novia (2001), Luna de Avellaneda (2004), El secreto de sus ojos (2009), winner of am Oscar for Best Foreign Film in 2010, and Metegol (2013). Among other TV work, he has directed, produced and written the miniseries Vientos de Agua (2006), which won 5 Martín Fierro awards. In 2012, he returned to the small screen with the series El Hombre de tu Vida. He was also the showrunner for Entre Caníbales (2015). In 2013, he presented Parque Lezama, completing a lifelong ambition of directing for theatre and recently returned to theatre with ¿Qué hacemos con Walter?