The Economics of Immigration 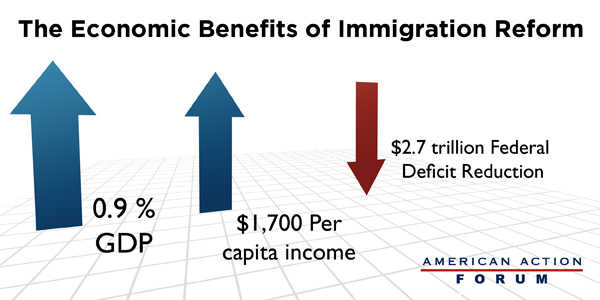 AILA.- Discussions on immigration in the United States often consist of heated outbursts based on a multitude of passionate and unreasonable positions. Whenever the topic of immigration comes up, it seems like the most extreme rhetoric, on both sides of the issue, ends up garnering the most attention.  But on July 13, Ann Saphir and Terry Wade reported for Reuters (Fed policymakers) on a point that perhaps all sides of the immigration debate can support: positive immigration growth leads to economic growth.

Though opponents of immigration reform often use stereotypes and fearmongering to try and show that any positive economic benefit resulting from immigration is offset by the consumption of public benefits, this is just not true. The economic benefits of immigration reform have been well-documented by the American Immigration Council.   And just last week, two regional Federal Reserve Bank presidents, from Dallas and Minneapolis, not politicians or advocacy groups, stated clearly and unequivocally, that continued immigration growth is a key factor to economic growth in the United States.  As Minneapolis Federal Reserve President Neel Kashkari said, “If we have a population that’s not growing, it’s much harder to have economic growth.”

In this year’s presidential race, both political parties claim that they will grow the economy and put people to work. Certainly this result would be good for all Americans. But, as Saphir and Wade reported, the Federal Reserve does not believe that low interest rates alone can sustain economic growth; population increases must also be a part of the equation. According to the U.S. Census Bureau report released in December 2015, seven states saw population declines or zero growth, and with that, negative economic growth Saphir and Wade note that, “Fed officials increasingly believe the U.S. economy’s long-term growth potential may have fallen to around 2 percent, well below the historical norm, and many, including Fed Chair Janet Yellen, have lately suggested that only structural changes beyond the central bank’s purview can lift growth higher.”

If we are going to get more Americans back to work and lift up the middle class as both parties claim they will do, a real discussion about the true value of immigration to the U.S. economy must happen. Economic growth is good for everyone, regardless of your opinion about immigration. So let’s stop the overheated outbursts and focus on creating immigration policies that will help us all.