Mexicali Begins Work for The Museum of Chinese Food 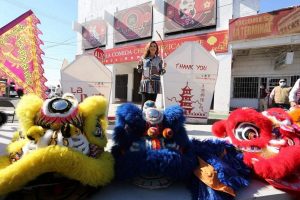 In order to rescue the roots and traditions of our town, within the framework of the celebration of the first anniversary of China Day in Mexicali, Mayor Marina del Pilar Ávila Olmeda, announced the start of the works of the Mexican Chinese Food Museum, a project that is part of the renovation work of downtown Mexicali, promoted by the Municipal Government.

Marina del Pilar, explained that this museum will undoubtedly be an instrument of Cultural and Tourist promotion for our city, by becoming a meeting point for those who seek to live a local, unique and authentic experience of Mexicali.

She explained that this project is integrated into a circuit of Tourist – Cultural products such as the Callejón de “La Chinesca”, the Tours through the Basements, the Chinese pagoda, within the perimeter where the most traditional Chinese Cafes and Restaurants are located in the city, making this a sustainable and comprehensive project.

The Mayor declared that the installation of a Museum within the La Chinesca area is a clear example of commitment and drive for the area, it develops a cultural concept of destination for visitors and citizens, giving one more reason to visit Mexicali.

On the other hand, the Mayor stressed that the rescue of the Historic Center is a great challenge that continues to advance despite the health pandemic and the serious global economic crisis, the city of Mexicali continues with the commitment to transform “La Chinesca” working as a team with the State and Federal Government, the Chinese Community of Mexicali, merchants and citizens.

For her part, Karen Postlethwaite, on behalf of the State Governor Jaime Bonilla Valdez, stated that, with an investment of 35 million pesos, the underground infrastructure of the downtown area will be improved, the urban image, lighting, sidewalks, and dignity of the area will be improved.

Similarly, Enrique Auyon, representative of the Chinese Community in this capital thanked Mayor Marina del Pilar, for the boost she has given to the Historic Center, joint efforts of the community she represents.

Finally, Marina del Pilar, announced that this project will conclude in February next year, within the framework of the Chinese New Year.