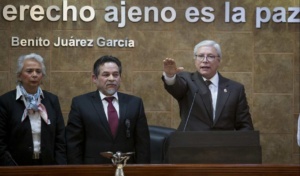 In a solemn act, celebrated at the plenary upper hall of the state congress, Jaime Bonilla Valdez took oath as the new governor of Baja California. He is the first governor of Mexico that is aligned to the National Regeneration Movement (Morena), the party currently in power at the presidency of the republic.

After 30 years under the administrations of Partido Acción Nacional (PAN), today, the mandate of a new party enters into force, which aims to repair some mistakes of the past, especially in the fight against corruption.

Bonilla Valdez made an appearance to pay tribute to the Mexican flag, and take oath at the ceremony that took about 30 minutes before members of the XXIV legislature. In addition, about forty guests were present, among members of his cabinet, as well as representatives of Morena.

The president of the board of legislators, Catalino Zavala Marquez, said that this new government will assert the responsibility of a new scenario of hopes placed by citizens at the polls on July 2.

The new governor is expected to continue with a tour around every municipality in Baja California, starting with Tijuana, at the Cultural Center, (Cecut), the night of this Friday, November 1, on his first official day of work heading the executive branch of the state.