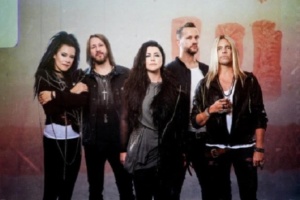 Evanescence tap into quarantine fever with their surreal, iPhone-filmed video for new single “The Game Is Over.” The clip, which the band filmed themselves, maximizes their limited resources with an array of creepy effects and deadpan stares.

The musicians scream, stand against blank walls, smear lipstick, and don masks as the distortion and violent percussion builds to operatic heights.

Evanescence, a group that started as a gothic-rock band has changed over the year and have been able to reinvent themselves with a new music style.

The lineup of the group changed several times over the course of the first two studio albums productions and promotions: David Hodges left in 2002, co-founder Moody left in 2003 (mid-tour), bassist Will Boyd in 2006, followed by guitarist John LeCompt and drummer Rocky Gray in 2007, and Terry Balsamo in 2015. As a result, none of the band’s three studio albums feature the same lineup.

The latter two changes led to a hiatus, with temporary band members contributing to tour performances.

The band reconvened in June 2009 with a new lineup; their next studio album, Evanescence, was released in 2011. It debuted at the top of the Billboard 200 chart with 127,000 copies in sales.

The album also debuted at number one on four other different Billboard charts; the Rock Albums, Digital Albums, Alternative Albums, and the Hard Rock Albums charts. The band spent 2012 on tour in promotion of their latest album with other bands including The Pretty Reckless and Fair to Midland. Troy McLawhorn also became a full-time band member during this time. Following the end of the album’s tour cycle in 2012, the band entered another hiatus.

In 2015, Evanescence emerged from hiatus and announced they would resume touring; however, they denied that new Evanescence material was being produced, as Lee was focusing on a solo project instead. In addition, Balsamo left the band and was replaced by Jen Majura. Late 2016 saw additional touring from the band and a statement from Amy Lee that Evanescence would continue. In March 2017, Lee stated Evanescence was working on the fourth album for release later in 2017. The synthesis was released worldwide on November 10, 2017, and marked a stylistic change in the band’s sound.