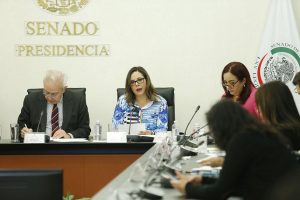 The senator for Baja California, Gina Andrea Cruz Blackledge, highlighted the importance of consulates since they are for the defense of Mexicans who are abroad, especially in the United States where a large population of compatriots is concentrated.

The legislator for National Action Party highlighted this, during the appearance of citizen Marco Moreno Báez, before the North American Foreign Relations Commission, who has received its approval to occupy the position of Consul General of Mexico in Nogales, Arizona.

“The Mexican consulate in Nogales is highly relevant both because of its geographical location in the border area between the two countries, as well as because of the magnitude of the commercial exchanges that take place in this region. I must emphasize that a border consulate’s job is merely to protect Mexicans abroad.

“It should be noted that the Hispanic population in the state of Arizona is greater than 31% of the total, the majority being of Mexican origin, so it is of the utmost importance that this vacancy for consul general in the said constituency is filled now.”

Gina Cruz highlighted that Moreno Báez is a member of the foreign service, has extensive experience in the service, and, above all, because it is a border consulate, the knowledge that the titular official should be in charge of this consulate is important.