Construction of Trump’s wall begins in Arizona in 2019

Near Yuma, Arizona, the construction of the border wall funded by the Pentagon began.

The construction of a part of the border wall financed by the Pentagon began a few days ago near Yuma, Arizona, just when federal authorities published a list of Defense Department projects that will be removed in order to pay for that flagship project of President Donald Trump during 2019.

“The economic analysis indicates that construction of a wall on the border with Mexico with military funds begins in Arizona. While federal authorities made public a list of Department of Defense projects that will be canceled to pay for President Donald Trump’s wall,” said Dr. Alejandro Diaz Bautista, economist, a national researcher at Conacyt as well as a research professor at El Colegio from the Northern Border (El Colef).

The wall is a 9-meter (30-foot) steel fence that will be erected along the Colorado River in a border section where there was a sharp increase in the entry of migrant families this year, although it was significantly reduced in last weeks. The exact details of the project are unknown, but apparently the fence will cover about 8 kilometers (5 miles). 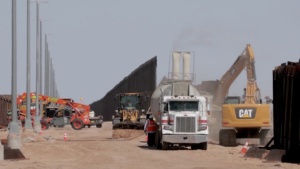 The beginning of the construction a few days ago coincided with the announcement of the Department of Defense on the cancellation of projects for $3.6 billion that would be carried out in military bases to finance the wall, which highlights the political dilemma in which many members of Congress seek re-election next year.

President Trump declared in February a national emergency to dispose of billions of dollars from the Pentagon to finance the wall, in addition to the $1.4 billion allocated by Congress. The victories of the president in court over the challenges of opponents and environmentalists allowed the start of wall work in recent weeks in Arizona and New Mexico.

In Arizona, environmentalists have filed lawsuits against some construction contracts on the grounds that the government illegally dispensed dozens of laws to build constructions on protected land. Two cases remain pending in federal court, and the American Civil Liberties Union (ACLU) said this week that it will file a lawsuit to prevent the channeling of more Pentagon resources to the works.

Immigration detentions have dropped considerably in the last two months due to summer heat and the strictest measures taken against migrants in Mexico.

The exact details of the project in Yuma are not clear, but apparently, it will consist of about 8 kilometers (5 miles) of fences along the Colorado River, in a section of the Mexican border that has seen a large increase in migrant families in the last year.