Children’s disappearances in a deficient system

Children’s and adolescents that disappeared in Mexico stand a difficult chance to be found if impunity and corruption continue to exist in the Mexican system.

Since the disappearance of the forty-three young students from the Normal Rural of Ayotzinapa “Raúl Isidro Burgos” School, in September 2014, Mexico was highly and internationally expose and bound to take major actions in this area. Nevertheless, the forty-three students are just a small portion of the big number of children’s and young people that disappear in Mexico every day. According to the Network for the Rights of Children in Mexico, the number of missing persons in Mexico has risen to approximate 27,000 disappearances, from that number 6,700 are children’s.

Actions must be taken; the country and the authorities cannot blind their eyes and look away from the problem. Corruption, impunity, and inefficiency of the existing systems and procedural rules for seeking missing children and adolescents make the scenario in a great scale very complex and an increase of cases, the number of cases rises day by day.

Mexico lacks efficient public policies to assist disappearances of children’s and adolescents. And like in most other areas, Mexico has failed to apply at the local level the appropriate programs to address the problem. 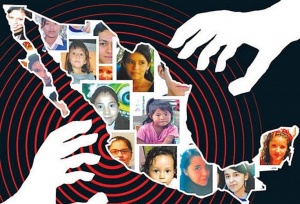 International actors have proposed an addition of a specific chapter, on children who disappeared, in the general law on missing persons of Mexico and have proposed to create a single search protocol. Nowadays, to start a disappearance search we have to wait 24 to 74 hours, which deters the chance of finding a child alive. Children are a vulnerable sector entitled to greater protection, therefore, it may be necessary to impose a different standard for children’s searches. International experience has given us that if a search starts after the first three hours of disappearance, there is a 90 percent chance of finding the child alive, this according to the Network for the Rights of Children in Mexico REDIM.

However, another problem that strikes me out is that even do a new amendment can bring hope and efficient procedures to address the issue; do these will really solve the problem?

It seems that the bigger picture here is that most of the cases of disappearances continue to increase because of the inefficiency of the government to act in time and according to the law. The performance of the system it might not be the bigger problem in the Mexican judicial system is possible that the bigger picture here is the corruption immerse in the system. The corruption and impunity that you find on the system are what is preventing from obtaining any result in any matter.

The executive authorities and legislators have a duty to put in their governmental agendas the discussion of the disappearances of children and disappearances in general. Nevertheless, they would be no magical solution to the problem of missing persons, if there is no solution to the bigger picture here: corruption and impunity. The government has to address this issue in order to solve the great number of human violations occurring in the country. It is time for the executive authorities and legislators to sit down and seek for actions against corruption and impunity. In this time of alternation of government is the proper time to address the issue and agree to solutions that would have real results.

-Editorial Anxiety and doubt were the reaction among social media users on Oct. 4 around …