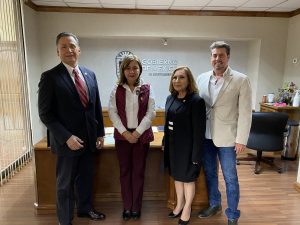 The relationship between the sister cities of Mexicali and Calexico took a step forward with a meeting between the two Mayors on April 26.

Calexico Mayor Rosie Arreola Fernandez and Mexicali Mayor Lupita Mora met to talk about the importance of continuing a binational relationship between the two cities.

“I think our biggest concern as sister cities in the border crossing, and I think the two governments need to continue working together and open those borders because it’s affecting us in the economy,” Fernandez said.

Also present was Calexico Mayor Pro Tem Javier Moreno who is in line to become Mayor of Calexico in July. Moreno, who was elected to the city council in November 2020, believes that both cities need to work together and tackle common issues.

“We need to continue with the relationship we had for the last 100 years and we want to do it by coming to the table and start the dialogue and find solutions. We need to talk about the pandemic and the long border wait times that affect our citizens,” Moreno said.

The meeting was coordinated by former Calexico Mayor Alex Perrone who has a lot of experience in the sister cities relationship. Perrone was Mayor of Calexico 2006-2007 and worked closely with then-Mexicali Mayor Samuel Ramos Flores.

Perrone believes Calexico should work closely with Mexicali and open the doors of opportunity for both cities.

“I’ve always valued our border relationship and thought it would be good to put this meeting together,” Perrone said. “We need the council to give the relationship with Mexicali the importance it deserves.”

“We will be working together for the benefit of Mexicali and Calexico, we are working on some projects that will benefit our cities and Imperial Valley,” Mayor Mora said.

The meeting focused on the border travel restrictions and the COVID-19 on both sides of the border. Mayor Fernandez invited Mayor Mora to attend the May 5th meeting in Calexico so she can introduce herself to the council.