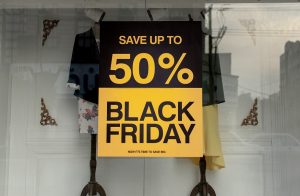 Black Friday online sales hit a new record this year as pandemic-wary Americans filled virtual carts instead of real ones.

Consumers spent an estimated $9 billion on U.S. retail websites on Black Friday, according to Adobe Analytics, which tracks online shopping.

Roughly half as many people visited stores on Black Friday as they did last year, according to research firms that track foot traffic.

That was a 22% increase over the previous record of $7.4 billion set in 2019. Meanwhile, traffic to physical stores plummeted as retailers tried to prevent crowds by cutting their hours and limiting doorbuster deals. U.S. store visits dropped by 52% on Black Friday, according to Sensormatic Solutions, a retail tracker. Traffic was slower in the Northeast and West than in the Midwest and South, said Brian Field, Sensormatic’s senior director of global retail consulting.

Smartphones continued to account for an increasing proportion of online sales, with this year’s $3.6 billion up 25.3%, while alternative deliveries — a sign of the e-commerce space maturing — also continued to grow, with in-store and curbside pickup up 52% in 2019.

For the six key weeks of the holiday season this year, traffic in retail stores is expected to be down 22% to 25% year over year, an earlier forecast by Sensormatic Solutions said.

On Thanksgiving Day, when many retailers including Walmart and Target closed their stores this year due to the pandemic, traffic dropped 94.9% year over year, according to the firm. Week-to-date, traffic is down 45.2% across the U.S.

That makes Black Friday 2020 the second-largest online spending day in history in the United States, behind Cyber Monday last year, Adobe said. Cyber Monday this year is slated to become the largest digital sales day ever, with spending reaching between $10.8 billion and $12.7 billion, which would represent growth of 15% to 35% from a year earlier.