There are people whose history transcends after death, perhaps this happens when someone was able to make their dreams come true or fulfill their purpose in life because that’s when everything someone does is done with passion and faith, necessary elements to be able to leave an indelible mark on the world, such as the case of Walter Elias Disney, the creator of Disneyland.

When I was thinking about a character on whom I could base my inspirational story for the beginning of the year, several characters came to my mind, but the most significant and transcendental, without a doubt, was the great Walt Disney. 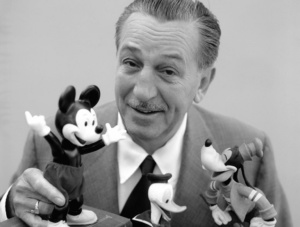 The reason is that Walter Elías Disney, who was born last century on December 5, 1901, was not only a great businessman, who became a tycoon of animation and the most famous productions of recent times but was a person who decided to go much further, having found a way to capitalize on his great talent.

The most impressive thing about Walt is not the fact that he found great success in his professional career, but how he was able to overcome several failures that even led him to live on the streets and eat whatever was available, a life lesson he represented in his sentence when he said that he often had artistic successes, but financial failures.

His humble origins in a home where he was the fourth child of five, made him wake up in his hunger for success, and after not being very dedicated to secular education he decided to pursue his artistic aspirations as a cartoonist and animator, after several failed attempts, he created the great character that would take him to the apex of success: Mickey Mouse.

It was at a farm near Marceline, Missouri, where Walt’s love for animals grew and he soon became interested in drawing, selling his first sketches to neighbors when he was only seven years old.

During the fall of 1918, Disney tried to enlist for military service. But after being rejected because he was only 16 years old, Walt forged his birth certificate to join the Red Cross and was sent abroad, where he spent a year driving an ambulance and moving Red Cross officials. His ambulance was covered with drawings of his creation.

After the war, Walt returned to Kansas City, where he began his career as an advertising artist. Here, in 1920, he created and marketed his first original animated cartoons, and later perfected a new method to combine live-action and animation.

Walt Disney began his career in animation with the Kansas City Film Ad Company in Missouri in 1920. And in 1922, Disney and his friend Ub Iwerks, a talented animator, founded the Laugh-O-gram Films studio in Kansas City and began producing a series of cartoons based on fables and fairy tales.

After the failure of his first business adventure “Laugh-O-gram Films” in Kansas City, with $40 dollars in his pocket, along with a briefcase that carried a full animated and live-action film and a handful of faith, Walt Disney moved to Hollywood by train from Kansas City to pursue his dreams in Hollywood, and managed to establish with his brother Roy, “Disney Brothers Studio”; this happened after getting a contract for “Alice’s Comedies”, a series in which a young woman filmed in live-action interacted with animated characters. 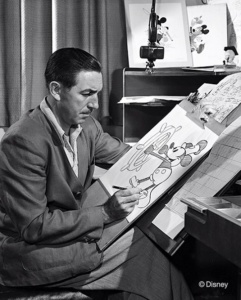 His old Kansas work team followed him to Hollywood and achieved the invention of cartoon characters such as Mickey Mouse, Donald Duck, Minnie, and Goofy, combined with the clever use of music, sound and popular material (as in the Three Little Pigs), made the Disney short films of the 1930s successful worldwide.

At the same time, in the summer of 1935, Walt and Roy Disney traveled with their wives to New York and boarded the luxurious Normandie cruise to begin their “grand tour” through Europe for a period of two months. Undoubtedly, this trip set the tone for what would be his progress and his growing fame, with the influence that marked his next three decades, the films he produced, the artists he hired and the ideas he used in the design of the Disneyland theme park, which opened its doors to the public on Sunday, July 17, 1955.

When Disney returned from Europe they did not return empty-handed. They brought with them a total of 335 books with fables, stories and tails from ancient Europe, of which 90 were from France, 81 from England, 149 from Germany and 15 from Italy. These books contained illustrations made by the most prominent artists of their time, and some of these stories were not the beautiful stories of Disney’s world-famous fairy tales, they were horrific horror stories that were redesigned under the direction, imagination, and creativity of Walt and his team, transforming them into attractive innocent fairy tales for children that quickly became popular all over the world.

This success led to the establishment of highly profitable and Disney-controlled secondary activities in advertising, publications, and marketing.

Unquestionably, Walt Disney had great talent, David Low, the old British political cartoonist, called him “the most important figure in graphic arts since Leonardo”. A pioneer and innovator, and possessor of one of the most fertile imaginations the world has ever known. Walt Disney, along with his team members, received more than 950 honors and appointments from around the world, including 48 Academy Awards® and 7 Emmys® during his lifetime. 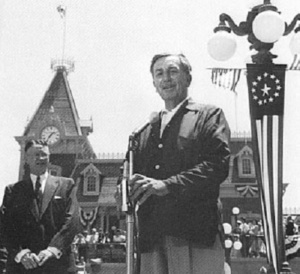 Walt Disney’s personal awards included honorary degrees from Harvard, Yale, the University of Southern California and UCLA; the Presidential Medal of Freedom; Decorations of the Legion of Honor of France and the Official of the Academy; The Order of the Crown of Thailand; The Order of the Southern Cross of Brazil; The Order of the Aztec Eagle of Mexico; and the Showman of the World Award from the National Theater Owners Association.

Disneyland, launched in 1955 as a fabulous Magic World of $17 million, soon increased its investment ten times and entertained, in its fourth decade, more than 400 million people, including presidents, kings and queens and royalty from all over the world.

A pioneer in the field of television programming, Disney began producing in 1954 and was one of the first to present full-color programming with its Wonderful World of Color in 1961. The Mickey Mouse Club and Zorro were popular favorites in the decade of 1950. 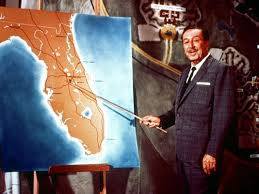 Disney also directed the purchase of 43 square miles of land in downtown Florida. Here, the master planned a new world of Disney entertainment to include a new amusement theme park, a resort with a hotel and its Experimental Prototypical Community of Tomorrow land. This ideal site was named Walt Disney World and opened its doors to the public as scheduled on October 1, 1971.

There are many things that could be said about Walt Disney, but among the most popular is he is a legend and a popular hero of the twentieth century. And the most fascinating thing about this explosive success and worldwide popularity was based on the ideas that his name represents: imagination, optimism, and success in the American tradition. 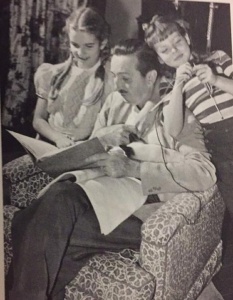 As he said on the day of the inauguration of his dream park, which was born into an idea by taking his daughters for a walk 17 years before his inauguration when on Saturday afternoons he ate peanuts while watching them play and imagined a place of entertainment where children and parents could have fun together: “This is a place dedicated to the ideals, dreams, and hard data that have created America,” said Disney at his inauguration.

Walt died on December 15, 1966, due to lung cancer caused by his tobacco addiction from an early age. The curtain closed that day for the great inspirer of dreams to many generations.

Walt Disney did more to touch the hearts, minds, and emotions of millions of Americans than any other man in the last century. Through his work, he brought joy, happiness and a universal means of communication for the people of each nation, where not only everyone found a common language through the cartoons that made the lives of many children and adults around the world more enjoyable.

Certainly, hardly ever our world would meet another Walt Disney, a man whose life is still the model many dreamers want to reach, and who showed through his own life that being a good man can also become a great business.