Trump Impeached for The Second Time 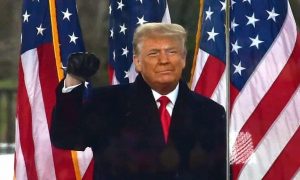 The second impeachment trial of former President Donald Trump began Tuesday with a 13-minute video compilation of the Jan. 6 attack on the U.S. Capitol.

The Senate voted 56-44 to proceed, with six Republicans joining Democrats who supported moving forward with the trial.

Rep. Jamie Raskin, D-Md., opened the trial with the video, featuring meticulously edited footage of Trump speaking at the rally that day interspersed with members of the crowd growing more violent, profanely threatening the security forces trying to protect the Capitol and breaking through doors. It showed, briefly, the shooting death of Ashli Babbitt. It showed a snippet of Trump’s video falsely claiming the election was stolen even as the attacks raged.

Many of the rioters included in the video invoked Trump. Some waved Trump flags. Some wore MAGA hats.

The Democrats will have up to 16 hours spread over the next two days to make their case in the Senate to convict the former President.

Six GOP senators voted with Democrats on the question of whether the impeachment trial against Trump was constitutional. It was the second time such a vote was taken after Sen. Rand Paul, a Kentucky Republican, forced a vote on the same question last month. Cassidy emerged as the sole Republican today to switch his vote after that initial vote on constitutionality.

According to CNN. Former President Donald Trump was unhappy with his impeachment lawyer Bruce Castor’s opening argument on the Senate floor.

Castor, who is representing Trump alongside attorney David Schoen, delivered a meandering argument during the first day of the Senate impeachment trial, including praise for the House impeachment managers for a presentation that he said was “well done.”

Trump was almost screaming as Castor struggled to get at the heart of his defense team’s argument, which is supposed to be over the constitutionality of holding a trial for a president no longer in office.