THERE IS A NEW MILLIONAIRE THANKS TO CETYS RAFFLE 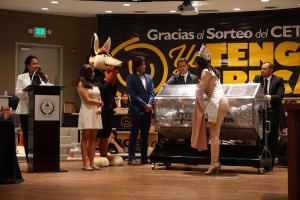 One million dollars was the prize Juan from the city of Ensenada won, thanks to ticket 140222 of CETYSorteo Millonario edition number 75  which took place this Friday, May 26th.

The event was held at the Auditorium Don Gustavo Vildósola Castro Campus Mexicali, it also had a second prize of one million pesos, same that Gerardo, from Mexicali, won with number 185505; in addition, there were three winners of 500 thousand pesos each; they are Jorge, Julián and María with tickets: 277086, 214514, 53821 respectively. Four prizes of five centenarians each were also drawn, which Clara, Sandra, Ivan and Consuelo with the numbers 202425, 48101, 276612 and 173876.

145 thousand tickets were sold out, and all the money collected from this activity completely contributes to the 8 out of 10 students at the CETYS University System that have a scholarship or financial aid. The event was presided over by the Dean, Dr. Fernando León García, who stated that it is a pride that the community of Baja California supports the forming of educated people who are agents of change in our society.

In the framework of the 75th Magno Sorteo (raffle), the third contributors’ raffle also took place in which Mariana, from the city of Ensenada, won a certified cash check for 175 thousand pesos with ticket 88214.

To certify the legality of the event, the Director of raffles, Mr. Ernesto Tamayo Camacho, and the Inspectors from the Secretary of Government, Mrs. Karla Leticia Ruiz Corrales and Mr. Eduardo Jesús Ruizorozco Pérez, were present.

The director of raffles invited the entire community who supported Cetys by buying a ticket to check the complete list of winners which will be published on the website: www.sorteos.cetys.mx from early hours of Saturday May 26.