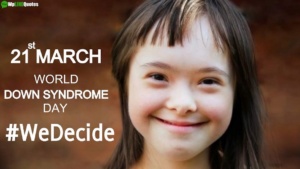 World Down Syndrome Day is marked each year on March 21.

The 21st day of March (the 3rd month of the year) was selected to signify the uniqueness of the triplication (trisomy) of the 21st chromosome which causes Down syndrome.

This year of 2020, The World Down Syndrome Day Theme is focused on “We Decide”, all people with Down syndrome should have full participation in decision making about matters relating to, or affecting, their lives.

This day was first observed in 2006 in many countries around the world.

Following the joint work of Brazil and Poland, the resolution was adopted by consensus during the plenary meeting of the Third Committee of the United Nations General Assembly on Thursday 10 November 2011. The resolution stemmed from an original request by the Brazilian Federation of Associations of Down Syndrome, who worked with Down Syndrome International and its members to launch an extensive campaign to generate international support. The resolution was eventually co-sponsored by 78 UN Member States.