Breaking News
Home / Education / STATE GOVERNMENT DEPOSITS PAYMENT TO BUREAUCRATS, AS WELL AS TO VARIOUS ALLOCATIONS PENDING TO THE JUDICIAL POWER AND OTHER ORGANISMS

STATE GOVERNMENT DEPOSITS PAYMENT TO BUREAUCRATS, AS WELL AS TO VARIOUS ALLOCATIONS PENDING TO THE JUDICIAL POWER AND OTHER ORGANISMS 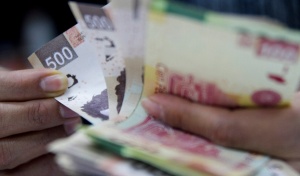 MEXICALI, BC- The Government of the State of Baja California reports that as of Monday noon, it began with the deposit of the pending days for state bonuses to state bureaucrats, as well as various pending assignments to the Judicial Branch, parastatals and autonomous, all the above for a global amount exceeding 395 million pesos.

The Secretary of Planning and Finance of the State, Bladimiro Hernández Díaz, informed the foregoing at the time of highlighting the steps taken by the state administration headed by Governor Francisco Vega de Lamadrid, to achieve this progress today with regard to the compliance with various payment commitments that remained pending as a result of the financial complications that arose due to the failure to send extraordinary resources for education, by the last federal administration.

He explained that in this manner various transfers were processed  among which those corresponding to the Judiciary, which will allow them to deposit their biweekly payment and Christmas bonus to their staff, as was done to the Supreme Audit Office of the State ; while other agencies that also received diverse assignments were the State Sports Institute (INDE); the State Youth Institute (JuventudBC); the Institute for Women of the State (INMUJER); the Institute of Transparency (ITAIPBC) and Issstecali, in the case of the latter to ensure the payment of bonuses to retirees of bureaucracy.

Still without depositing extraordinary federal resources for education to the State

Regarding the pending payment to teachers and retired education workers, the state official clarified that this resource has not yet been deposited, which is expected to be filed by the Federal Administration in the next few hours, reiterating that once received this resource , it will be processed immediately to perform the corresponding procedures for the payment of outstanding pending balances to the teachers, both active and retired, so he called to be aware of this procedure, which will be informed in a timely manner.