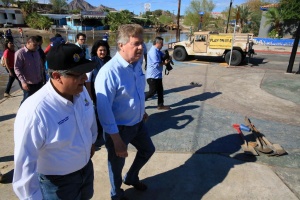 SAN FELIPE, BC- Tuesday, October 2, 2018.- As a result of the application of preventive measures between authorities and society, Baja California was declared with white balance after the passage of the hurricane degraded to tropical storm “Rosa” by the entity, in a working meeting of the State Council of Civil Protection, which was headed by Governor Francisco Vega de Lamadrid, and the Mayor of Mexicali, Gustavo Sánchez Vásquez, where it was determined the red alert to be lifted which had been declared for the entity, to give step to the works of evaluation and repair of damages, highlighting that the first purpose was to safeguard the integrity of Baja Californians, which was achieved.

During the meeting in which authorities of the three branches of government participated as well as the Mexican Army, Navy, Red Cross and Fire Departments; the state governor acknowledged everyone’s work, including the people, who by attending all recommendations made in advance, allowed the red alert to be lifted this day.

The Governor Vega de Lamadrid, explained that from the beginning the protocol was revised achieving a great coordination in Baja California, “we have always had a great coordination and on this occasion it was demonstrated to have passed the test, however we should not lower the guard “, at the time he gave wide recognition to the Mayor of Mexicali, his wife Margarita Flores de Sánchez and his team, for the work done.

He said that prevention is the best medicine we can apply, at the same time he said he is convinced that in collaboration with everyone and the population, results such as those obtained with the passage of hurricane “Rosa” in the region, can be achieved.

On the other hand, federal, state and municipal officials made a recount of the actions taken to contain the natural phenomenon, highlighting the attention to 75 people in a shelter in San Felipe and 40 more in street condition, served in Mexicali; likewise, there were only damages that fortunately did not result in human losses.

In this regard, the General Director of Civil Protection, Ricardo de la Cruz Musalem, acknowledged that no alert is required, now what follows is work on the recovery of the affected areas.

Subsequently, the authorities proceeded to make a tour of different areas affected in San Felipe, where they could observe the work being done to return the port to normal in the shortest possible time.