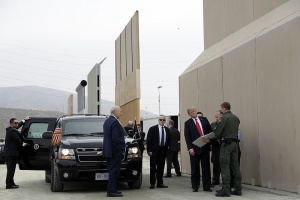 Yesterday, Trump visited San Diego, the president arrived just before 11:30 a.m. when Air Force One touched down on the tarmac at MCAS Miramar. This was his first official visit to San Diego since taking the oath of office, to check the prototypes for the wall just a few feet from the U.S.-Mexico border.

During this visit he reviewed prototypes for his proposed U.S.-Mexico border wall and offered a press conference in which he stated: “The border wall is truly our first line of defense, it’s probably if you think about it the first and last other than the great ICE agents and other people moving people out”.

Joining him were the Secretary of Homeland Security Kirstjen Nielsen and border agents and officers as he viewed the eight different prototypes that were built last year in October. Trump explained that a new modernized wall could stop 99 percent of illegal cross-border migration.

“We have a lousy wall over here now but at least it stops 90, 95 percent. When we put up the real wall we’re going to stop 99 percent, maybe more than that,” he said. He also mentioned that for the people that say, ‘No Wall’ if they didn’t have walls over at the border, then they wouldn’t even have a country.

Trump previously ordered that the new wall be between 18 and 30 feet tall, be able to blend in with its surroundings and withstand a 30-minute attack.

Of the prototypes, the president said he prefers something that was transparent because that way you can see what’s on the other side of the wall. He also added that a slatted wall might be more susceptible to damage, though.

Moments after Air Force One took off from MCAS Miramar, the president tweeted that “If we don’t have a wall system, we’re not going to have a country.”

His tweet, a rehash of comments he made during a brief formal news conference at the end of his tour, pressured Congress to fund the wall project and prohibit grants to so-called sanctuary cities.

Although, according to his administration’s latest funding proposal, a 722-mile wall would cost $18 billion over the next 10 years, or about $25 million per mile. The Department of Homeland Security has repeatedly argued (most recently in a video) that San Diego is an example of why “walls work.”

A recent report by the Washington Office on Latin America (WOLA) makes clear why building a wall would be a wasteful and ineffective approach to challenges like migration and drug trafficking. The report is based on field research conducted last year into San Diego’s experience with its 46 miles of border fencing.

“San Diego’s fence discouraged people from trying to cross over into the United States only because it’s located in a highly urban area, between two cities of over 1 million people,” said WOLA Director for Defense Oversight Adam Isacson. “Nearly all such areas along the U.S.-Mexico border already have fencing. A wall only slows down a would-be border crosser for several minutes, which makes zero difference in the rural, isolated areas where Trump wants to build his wall—or even in the 14 sparsely populated miles of the San Diego sector that don’t have a wall today. Moreover, a wall does nothing to deter the families and children from Central America who come to the U.S.-Mexico border purposefully looking to turn themselves in to authorities, because they’ve fled violence in their home countries and are seeking protection in the United States.”