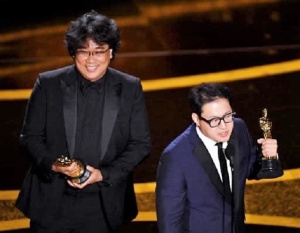 The 92nd annual Academy Awards took place today as the best films of the year compete to win the highest award.

The surprise of the night was the South Korean movie, Parasite who became the sensation of the ceremony.

Parasite is a 2019 South Korean black comedy thriller film directed by Bong Joon-ho, who also co-wrote the screenplay with Han Jin-won. It stars Song Kang-ho, Lee Sun-kyun, Cho Yeo-jeong, Choi Woo-shik, and Park So-dam, and follows the members of a poor household who scheme to become employed by a wealthy family by infiltrating the household and posing as unrelated, highly qualified individuals.