Breaking News
Home / Opinion / Migrants in the United States, the opportunity for Mexico

Migrants in the United States, the opportunity for Mexico

By: Víctor Hermosillo, Senator in México

Young people in Mexico are struggling every day to enter college, unfortunately thousands do not find the opportunity to start because they do not have economic capacity to access or because places in public universities are overtaken by demand; however, of those who manage to enter, few complete their careers and the number is reduced even more for those who do a doctorate degree.

China tops the list with the highest number of students in the United States with 304,040; followed by India with 132,888; South Korea with 68,047; and Mexico with about 18,000; according to the Institute of International Education, which shows that despite the great economic integration between our nations, this has not been reflected in the academic exchange that impacts the North American region as its potential merits.

On April 3rd I met with Janet Napolitano, former Secretary of Homeland Security in the Obama administration, former Governor and Arizona attorney, and now president of the University of California; the purpose of her visit: to strengthen ties between the institution she represents and recognized universities in Mexico such as the National Autonomous University of Mexico and the Monterrey Institute of Technology and Higher Education.

The University of California is the educational institution with the most students in the state and has contacts with the most important universities in our country. Napolitano emphasized that the institution she represents will protect students of foreign origin because she recognizes the value of young people who are trained in that state of the American Union and above all, the fact that being undocumented does not mean they do not have the ability to transcend.

Proof of this is the case of my native of Baja California, Yordi Muñoz, who for almost a year was illegal in California, with no college education and no employment, only supported with what his wife contributed and remained hidden in his home for fear of being deported; today he is the CEO of one of the world’s largest drone companies.

Another paradigmatic case is that of another countryman, the current President of the Senate of California, Kevin de Leon, who crossed with his mother when he was only a child, being undocumented, and today he is one of the most important Democratic figures in California with a promising future.

This reveals to us the caution of avoiding making negative judgments from an economic and migratory condition, because in each one of the brave people that cross the border is the potential of transcending, because those Mexicans and Latinos who dare to begin their journey abandoning their comfort zone toward uncertainty, but with a conviction and a goal of a better future for themselves and their families, makes them the most important entrepreneurs that Mexico is losing and the United States is winning. 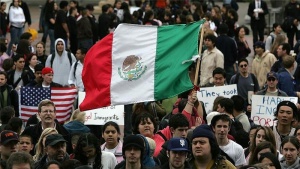 With the implementation of the DACA promoted by the Republicans in the George Bush administration and launched during Barack Obama administration, around 500 thousand young people of Mexican origin were given the opportunity to study and remain in the United States. However, with the Donald Trump’s arrival to the Presidency, the continuity of this policy has been questioned although the New Yorker has declared that he will not deport students but those that he considers criminals.

In the early days of the administration we have seen a smaller number of deportees compared to the previous administration, we also see that the Republicans in Congress have not given a green light to all of Trump’s demands, proof of this is that they did not get the votes to throw away the Obama care and apparently the wall that he threatened to build will remain in just reinforcement of some points with fences.

Every day in the United States a new opponent comes out to what Donald Trump represents, as it has been done by judges who bury executive actions against migrants and the American society that mostly disapproves the management of their President, only 35% support it.

Now it’s easy to see that Trump’s sayings only burned the campaigns and that in fact they are hard promises, so it’s worth recognizing Americans who from the beginning said no to the President’s follies, particularly in the state of New York and California which since January 21 were declared in favor of migrants and who immediately became sanctuary regions.

That is why I have emphasized the approach of Janet Napolitano as a model that although there are some politicians on both sides of the border who would like to see the United States and Mexico confronting each other only to take political advantage, in fact our societies are more integrated than ever, not for nothing has just been announced that the next FIFA World Cup 2026 will be held for the first time in three nations: Canada, the United States and Mexico, so blunt.

To those reading this, particularly young Mexicans, I want to say that I recognize your courage and determination to be there.

When all this has passed and you decide to undertake projects for the benefit of thousands or millions of people, think that in addition to satisfying your own desires, there is a country of which you are ambassadors and with your actions you can also help the millions living in Mexico.

Over the last years in Mexico the idea that we should go to its aid is promoted, when in fact I consider that you are the greatest force of the country and that in any case, you from your positions will be our voice and arms so that our country develops and occupies a more important place in the world.

They may be the best version of us.