Mexico, the richest country in the world

The year ends and we also approach the end of another six-year term in Mexico, a time when hope and promises are renewed, although the problems in our country remain the same: corruption, impunity and insecurity. In addition, we now deal with a hostile neighbor and with the uncertainty that our most important trade agreement, NAFTA, may end.

The challenges for Mexico are many and very complex, the return of the PRI party in 2012 exceeded the most pessimistic expectations, because the violence in this sexennium is the highest since it’s registered with an increase of 55 percent in the last 5 years, according to figures from the National Public Security System. Every hour three Mexicans are killed and 2017 was crowned as the most violent year with 22 thousand people killed until the month of November.

The government of Peña Nieto decided to abandon the implementation of major issues approved in Congress as the educational reform; there was no willingness to do anything for the universities that are experiencing a crisis of resources, with less and less space to receive students and with difficulty to raise quality levels.

The same thing happened with foreign policy, remember that in 5 years we had 5 ambassadors in the United States, 3 secretaries of Foreign Affairs and up to 1 year after taking the protest as president, Peña Nieto visited the American Union. There is no doubt that communication with Obama and the United States was neglected, but the worst was yet to come when Trump was invited to Los Pinos (the presidential house in Mexico), which froze the relationship with Barack. 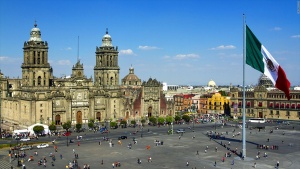 Know that we Mexicans are most interested in fighting corruption, violence and improving economic conditions. The candidate who gives us the certainty about those things, is the one who will have to be elected president in 2018, when people will vote to choose a new president of Mexico, representatives in Congress, governors in 9 entities and hundreds of city councils, a total 3, 326 positions.

We Mexicans cannot allow the continuity of the PRI party in power, since it was granted an opportunity in 2012 and it does not deserve another one in 2018. Even if they nominate someone external, the corruption and tricks of their party touch their entire structure and that’s exactly what has moored Mexico.

On the other hand, López Obrador does not offer a real change, but a return to the past, a return to the PRI party of the 70s where exaltation of patriotism, populism and fear of the external prevented the growth of our country.

Finally, many affirmed that the block which groups PAN, PRD and MC in a coalition called “Por México al Frente” (Mexico at the Forefront) could not be formed, they said that the union between the left and the right was not natural, but at the end it became a reality and a very attractive option that today governs 16 entities of the Mexican Republic and 16 of the most important capital cities of our country. This project does not only seeks to win the presidency, but to form a legislative alliance that fights corruption with an autonomous public prosecutor, reduces poverty with a fair income distribution and generates conditions for an accelerated economic growth.

Baron Humboldt said that “Mexico was the richest country in the world”, that idea has always driven us to have great aspirations, but also to accept enormous disappointments that have affected our mood as a nation; however, with work and determination we can make this vision a reality. This 2018 we have a new opportunity to decide well, to take the best option for Mexico.