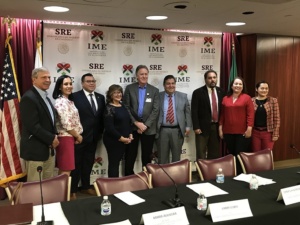 Like every year, the Mexican Consulate in Calexico inaugurated its annual health week where several organizations in the Imperial Valley join forces on both sides of the border.

“We want the people to be the main beneficiaries of this outreach and take advantage of any information and resources provided,” Consul Romero said.

Pioneers Memorial Hospital CEO Larry Lewis said binational health week is important for both sides of the border in keeping and informing the public about access to healthcare.

“Our main goal here at Pioneers is to keep people as healthy as possible and with the help of the consulate and being part of the binational health week will allow us to reach more people, ” Lewis said.

Binational Health Week has become one of the largest mobilization efforts in the Americas to improve the health and well-being of the underserved Latino population that lives in the United States. Federal, state and local government agencies, community-based organizations and thousands of volunteers come together in the month of October to conduct a series of health promotion and health activities including workshops, insurance referrals, vaccinations, and medical screenings.