MEXICALI PRESENT AT THE LARGEST INDUSTRIAL TRADE SHOW IN THE WORLD 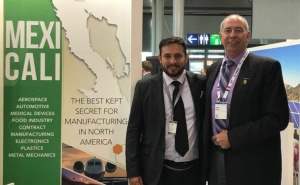 -Mexicali was present at the Hannover Messe world trade show

-The 2018 edition had Mexico as their guest country

Mexicali, B.C.- Mexicali was present at the Hannover Messe World Expo, considered the largest industrial trade show in the world, through participation in a booth for the Industrial Development Commission of Mexicali (CDI).

Mario Juárez López de Nava, President of the CDI informed that business meetings took place at the fair and that he participated in the Mexico – Germany business summit.

Both to the opening of the ceremony and the business summit the German Chancellor Angela Merker and the President of Mexico, Enrique Peña Nieto attended.

At the event that took place from April 22 to 27, there were 5 thousand exhibitors and there was an attendance of over  200 thousand visitors from all over the world.