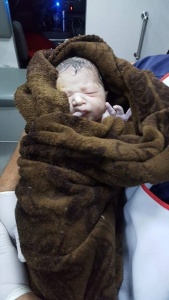 In the border city of Mexicali, a holiday season operation has been working in coordination between the three government orders: army, state police and municipal police, whose main objective is to safeguard the security of the population that transits or lives in this border city. However, these security issues do not only cover traffic incidents.

This morning a young woman in street situation who was identified as Fatima Castro Herrera of 30 years of age began to have labor pains on public streets around 3 AM, so she successfully communicated to the C-4 asking for help. After this call, an Ambulance Unit arrived at the place, together with agents of the municipal police, who due to the emergency had to assist in the delivery and managed to give birth to a girl to the complaining party.

After this, mother and daughter were transferred to the maternal and infant hospital for a medical evaluation.