Martin Luther King Remembrance Kicks off a month of celebrations 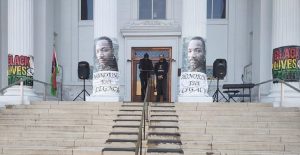 Through the use of nonviolent means, Dr. Martin Luther King Jr. sought to use the power of words with expressions of dignity, respect, education, determination, and faith as a way to fight for change.

And today the community honors those who have continued King’s legacy, not only by recognizing the need for social change but also by dedicating themselves to the service of their communities.

Like every year, the MLK Celebration Committee organized an event to recognize the legacy of Dr. King at the steps of the Imperial County Courthouse. The event began at the Martin Luther King Pavilion where people made the “Freedom Walk” towards the courthouse to witness the reenactment of the speech “I Have A Dream” that made an impact during the civil rights movement. There were also remarks from local elected officials who spoke about the legacy of Dr. King.

But this event was the first of several events that will recognize Dr. King and those who have carried his message.

The award’s name is derived from an excerpt from King’s “I Have a Dream” speech, where he stated, “Out of a mountain of despair, a stone of hope.”