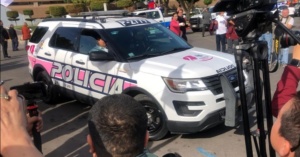 The Mayor of Mexicali, Marina del Pilar Ávila, along with the Public Safety Director, made official the launch of units for the new “Pink Force” division, which will be especially responsible for addressing emergency cases related to violence against women.

The Director of the Municipal Public Safety Department, María Elena Andrade, said that this new police force is in response to the more than 3,500 calls made to the emergency number, linked to domestic violence or violence against women. Likewise, she stressed that similar programs have been implemented in other municipalities, which have had excellent results.

The City Mayor, Marina del Pilar said she was satisfied to be able to fulfill this commitment that she announced during her campaign to mayor’s office, in addition to the good coordination she’s had with Public Safety in relation to violence, a problem, she said, is present every day in Mexicali, and that must be eradicated.

Finally, according to the ordered protocol, she called each of the new agents on the list to what will integrate the Pink Force and gave the starting signal to kick off the new Police Unit on board, in a van with a distinctive pink stripe, which will be officially operating in January 2020.