Madrugadores Group in Mexicali Changes its Board 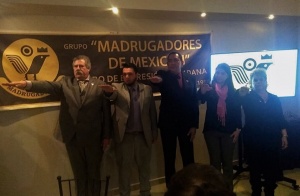 MEXICALI, B.C.- Mexicali Madrugadores Group had a change of board last Monday, January 14. Municipal and state authorities, as well as special guests from other cities, attended the ceremony held at Casino de Mexicali.

Mr. Jose Pablo Casillas Esquivias takes oath as the new coordinator of the group in Mexicali 2018-2019 and stated that he is starting a new challenge, since this group has consolidated as a conciliator between society and government, occupying an important position as an opinion leader and public social and governmental management at a national level.

As witnesses of the change of board of the Grupo Madrugadores de Mexicali was the city council member Natalia Figueroa taking part on behalf of the mayor of Mexicali, Gustavo Sánchez Vásquez and representing the governor of the state Francisco Vega de la Madrid was the head of the Secretary of Labor and Social Security, Francisco Miranda Roldan who congratulated and welcomed Eng. José Pablo Casillas Esquivias, who will serve as the new coordinator of this important citizen group that has worked for many years hand in hand with the State Government.

The state official, took advantage of the event framework to inform that the State is living a good time in labor and production, with a generation of jobs close to 70 thousand positions in 2018, and 253 thousand 842 throughout the State Administration, plus having an unemployment rate of 2.74%, one of the lowest in the country.

He affirmed that these results and the labor consolidation of our entity will be a reality through the sum of efforts, for which he recognized each and every one of the Madrugadores Group members from the various municipalities and other areas of the country and the U.S.

To conclude the protest, the results of last years’ Madrugadores group were presented, who highlighted the willingness to continue working with the different government orders, trying to achieve an integral development of all sectors.