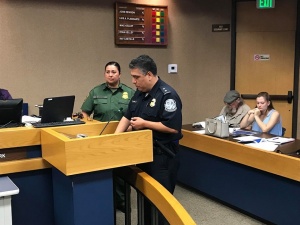 As the caravan of Central Americans continues to travel north through Mexico, the Border Patrol El Centro Sector and U.S. Customs and Border Protection made a joint presentation to the Imperial County Board of Supervisors about their plans if it arrives here.

With the recent announcement by President Donald Trump to deploy 5,000 troops to the southwest border it has created uncertainty among border communities and expectations as to how they will collaborate with the border patrol and CBP as the caravan nears the U.S. border.

“Our intention is to handle anyone from the migrant caravan that comes to the Imperial Valley in a professional and respectful way within the construct of our laws while minimizing any negative impacts to the community,” David Salazar Calexico Area Port Director told the board.

El Centro Border Patrol Sector Chief Gloria Chavez and Calexico Area Port Director David Salazar gave a presentation regarding the immigrant caravan at the Nov. 6 County Board of Supervisors meeting. As of Oct. 27, the caravan is estimated to be approximately 7,000 individuals as the caravan reached Mexico’s southern border some protests and violence against Mexican law enforcement were experienced.

Salazar said that the office of field operation (Calexico Port of Entry), U.S. Border Patrol, and Air and Marine Operations are making preparations in the event the migrant’s caravan comes to Mexicali/Imperial Valley.

Chief Chavez stressed that CBP is focused on minimizing disruptions to legitimate travel and trade and addressing public safety concerns. Most of Central Americans traditional routes are through Texas due to shorter distances to the U.S. Border. The caravan organizers have indicated that Tijuana/San Diego is their intended destination but expect a group of them to come to Mexicali or come through here so they can reach Tijuana.

Salazar said that Imperial Valley has a tiered plan in place that will utilize its own capabilities and if certain “triggers” are set, the capabilities of our strategic partners will be leveraged.