Leaders are not born 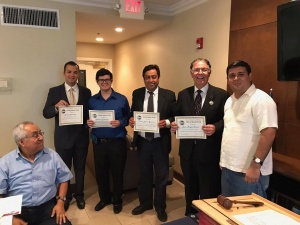 What if someone has a big idea they want to do but lack the skills to do it? A key of leadership lies in a key ingredient called communication. Knowing how to be good public speaker allows you to give a message that motivates and inspires people. Once you find your voice, you can bring positive change to your community.

Public speaking is however the number one fear among people according to surveys. The good news is that there is an organization that helps people improve their public speaking skills in a positive, supportive environment.

Toastmasters International is a 90 year old educational organization that operates clubs worldwide for the purpose of helping members improve their communication, public speaking, and leadership skills. Through its thousands of member clubs, Toastmasters International offers a program of communication and leadership projects designed to help people learn the arts of speaking, listening, and thinking.

A Toastmasters club adopts a “learn-by-doing” philosophy, wherein each member learns at a pace suitable to his or her developmental needs. The Toastmasters program is divided into two separate tracks, Communication and Leadership, with members progressing along each track by presenting speeches and taking on roles within their club, district, and Toastmasters International itself.

For each project, the member prepares and delivers a speech in front of the club. Speakers are expected to keep their presentations within prescribed time limits. For most Competent Communication speeches, the limit is five to seven minutes. The Icebreaker is between 4–6 minutes. While some advanced communication projects are five to seven minutes, some are shorter and most are longer, generally ten to fifteen minutes, and some are a half an hour or more. After the member gives the presentation, another Toastmaster evaluates the presenter based on the criteria for each project.