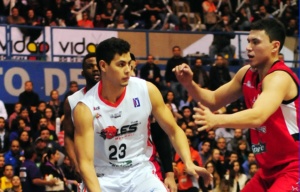 José Estrada rejoins Soles after a few seasons outside Mexicali, after joining the Cachanillas Estrada Stone was loaned to Captains of Mexico City in 2017, and in 2018 he was acquired by the Road Runner UAT.

“Very excited to belong to a historical team of the LNBP and happy to be able to share each game with my family, I am eager to return and join the team, I know the coach, I know his style and what each player demands”, said Stone firmly.

The young player stressed that he always seeks to achieve the goals ¨ I always set very high expectations and knowing that Soles is a winning team there is nothing left but to fight for a championship, we know that it will not be easy but the club is making every effort to be fighting for him¨.

José said that after participating in Peru with the national team, he is already desperate to start the new season, “I can’t wait for us to start and be in Mexicali, the Cachanilla fans, the best fans in Mexico, can see all my delivery and sacrifice in each game so that we can fill them with many joys¨.

José commented on the work carried out by the national team in the Panamericans of Lima, ¨ they were very tough matches with the selection that helps you learn from them, I had important moments that gave me confidence and I know that I can bring many good things to the club¨, concluded Estrada Stone.

In the previous season with Road Runners of Ciudad Victoria, Estrada Stone accumulated 9.6 units per game, 40% effective in field shots, 27% in long-distance shots, 83% from the free-throw line, 2.5 rebounds per game and 1.7 assists.