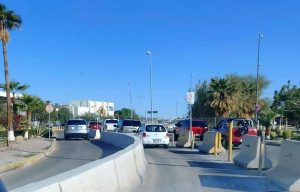 There will be no restrictions for anyone that wants to enter Mexico after the announcement of a new travel restriction that went into effect last week, Imperial County officials said on the March 25 joint press conference.

County CEO Tony Rohoutas was asked about the new travel restrictions implemented at the northern and southern border by the Mexican government last week to stop the spread of COVID-19. There was a lot of concern after the announcement was made since one media outlet claimed that people would not be allowed to enter Mexico if they didn’t prove that they had an essential business appointment. Rohoutas said that was false information and no such actions were taking place.

“We received a memo from the Baja California Governor’s office and that was not correct. That was a false narrative that was being shared and the governor’s memo contradicts that,” Rohoutas said.

Beyond Borders Gazette received a copy of the memo that quoted Governor Jaime Bonilla Valdez assuring that there will be no restrictions to enter Mexico from the United States as a measure to control the impacts of the Covid-19 pandemic. Asked on the subject during his Saturday broadcast, the Governor indicated: “There is no operation, that’s ʼfake newsʼ.

He immediately specified: “There are restrictions in the south of the country, in the entry of Guatemala, but not here, there are no restrictions, the restrictions are put by the United States, not Mexico, possibly that is what that statement referred to, if it existed, I haven’t found it.”

According to Associated Press, this restriction could help the administration of U.S. President Joe Biden handle a wave of Central American migrants reaching the U.S. border and it came on the same day the U.S. confirmed it will send 2.5 million doses of the AstraZeneca coronavirus vaccine to Mexico.

Officials from both countries skirted the question of whether the vaccines were being sent to Mexico in return for its decision to restrict entry on its southern border, though they acknowledged the decision came in the context of current talks on vaccines and immigration.