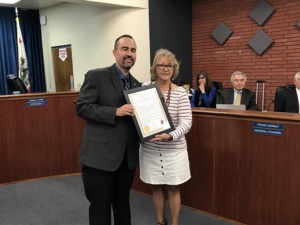 The Imperial Irrigation District went through a lot of legislative battles in 2019 but the board is focused and ready to meet the challenges ahead.

The first Imperial Irrigation District Board of Directors meeting of the year focused on what is to come in 2020 and celebrate the leadership of past Board President Erik Ortega at the Jan. 7 meetings.

Director Norma Sierra-Galindo will be at the helm in this upcoming year as Board President.

Ortega’s term was celebrated with a resolution in his honor that included recognition from state and federal representatives. The resolution highlighted Ortega’s continued dialogue with the state of California over its commitment to the Salton Sea Management Program and discussions with the federal government in pursuit of funding to support the restoration efforts to protect health and the environment.

He was also praised for his staunch leadership in opposing Assembly Bill 854, which would have usurped the authority of the IID Board of Directors and violated longstanding agreements and water rights of the district.

In a binational aspect, Ortega participated in the cooperation with CENACE through a presidential permit to meet increased energy needs in the Mexicali Valley.

Ortega thanked the board for their support and said it will be an experience he will not soon forget.

“Being president of the board was a really rewarding experience and I thank each of the directors for their support and help during the last year,” Ortega said.

Board President Norma Galindo described Ortega as a strong leader during his time at the helm.

“I found him to be a very gutsy leader, he is very misleading because he is very quiet and he sits back there and makes you think if he is even paying attention. But boy he is not only paying attention he is very active he has got the interest of the district paramount in his mind,” Galindo said. “He has defended the district against people who were his friends and allies so I cannot commend him enough and he will be a tough act to follow,”

Galindo is looking into 2020 to tackle the challenges at the legislative level and also to maintain the water rights. She said the first challenge will be the Michael Abatti lawsuit in court. Galindo said to be optimistic that there will be a ruling in favor of the IID but that doesn’t mean it will be the end.

“That is an issue of a philosophy and the philosophy is that some farmers feel they are the ones that are privy and qualify to administrate the water from the Colorado River,” Galindo said, “We as a board feel that we need to continue our fiduciary responsibility and we should determine how this water is used. If this lawsuit were to prevail, it would create a tremendous change to the Imperial County, regardless of what the other side says,”

At the meeting, IID Attorney Frank Oswalt gave a report about the Abatti lawsuit and said that the litigation has cost the district and the ratepayers $2.3 million so far.

The second challenge Galindo says the IID will face in 2020 is the continuance of AB 854 that, if approved, would give Coachella Valley six seats on the IID board. The bill was introduced by Assemblyman Chad Mayes from Yucca Valley. The bill is in a two-year continuance and could be brought up again for discussion.

“Even though this bill was suspended it is still very much alive because the assemblyman still wants to see it through,” she said.

Galindo added that this year there will be no raises in the water and power rates but they will analyze over the course of this year.