House Expected to Take Up Trump’s Border Wall this Week 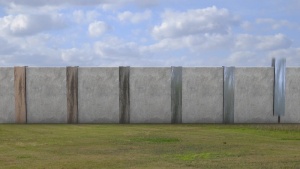 Washington, DC—This week, the House of Representatives is expected to take up $1.6 billion in funding for a wall along the U.S.-Mexico border as part of a major appropriations package, taking a big step towards funding one of President Trump’s signature campaign promises.

The House leadership is expected to undertake an extraordinary procedural move in the House Rules Committee to advance funding for the wall through the back door, by lumping it into a larger national security “minibus” bill that would fund large parts of the country’s national security budget.

WOLA (the Washington Office on Latin America), a leading research and advocacy organization with years of field research and experience working on migration and border security issues, has analyzed the proposal to fund the wall and found that it will not make the United States safer.

“The proposal to fund the wall to the tune of $1.6 billion dollars will be costly, ineffective, and divisive,” said WOLA Senior Associate Adam Isacson. “This funding does not belong in a national security appropriations bill. It squanders money that is badly needed for other priorities, like improving the border ports of entry through which most illegal drugs pass.”

The $1.6 billion in funding will support construction of only 60 miles of new fencing, and fortification of only 14 miles. At this rate, the cost will be $21.2 million per mile, amounting to at least $28 billion to construct fencing along all 1,317 border miles that lack it. Furthermore, the wall will do little to halt illegal flows of drugs across the border—most heroin, methamphetamine, and cocaine is actually trafficked through the 44 border ports of entry.

“It should be clear that $1.6 billion spent to start building the wall is money wasted,” said Isacson. “This divisive proposal will undercut badly needed counterdrug and counterterrorism cooperation with Mexico. It is also dangerous. It won’t stop migrants from trying to cross the border, instead, it will push them to endanger their lives on more remote and risky routes.”

In a new analysis piece, WOLA outlines the reasons why funding for a wall doesn’t belong in a national security appropriations bill.