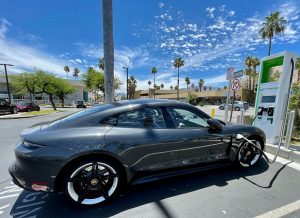 Automakers from Tesla to Rivian to Cadillac are hiking prices on their electric vehicles amid changing market conditions and rising commodity costs, specifically for key materials needed for EV batteries.

Battery prices have been declining for years, but that may be about to change. One firm projects a sharp increase in demand for battery minerals over the next four years that could push the price of EV battery cells up by more than 20%.

That’s on top of already-rising prices for battery-related raw materials, a result of supply-chain disruptions related to Covid and Russia’s invasion of Ukraine.

Electric cars also have impacts arising from the manufacturing of the vehicle. The manufacturing of the battery results in significant environmental impact, as it requires copper and aluminum for its anode and cathode. Since battery packs are heavy, manufacturers work to lighten the rest of the vehicle. As a result, electric car components contain many lightweight materials that require a lot of energy to produce and process, such as aluminum and carbon-fiber-reinforced polymers.

The mining and processing of metals such as lithium, copper, and nickel require significant energy and can release toxic compounds into the surrounding area. Local populations may be exposed to toxic substances through air and groundwater contamination.

Several reports have found that hybrid electric vehicles, plug-in hybrids, and all-electric cars generate more carbon emissions during their production than current ICE vehicles but still have a lower overall carbon footprint over the full life cycle. The initial higher carbon footprint is due mainly to battery production, but it is difficult to measure the embodied energy that is used to create the energy used to power the vehicle.

Battery electric vehicles have lower maintenance costs compared to internal combustion vehicles since electronic systems break down much less often than the mechanical systems in conventional vehicles, and the fewer mechanical systems onboard last longer due to the better use of the electric engine. Electric cars do not require oil changes and other routine maintenance checks.

Internal combustion engines are relatively inefficient at converting onboard fuel energy to propulsion as most of the energy is wasted as heat, and the rest while the engine is idling. Electric motors, on the other hand, are more efficient at converting stored energy into driving a vehicle. Electric drive vehicles do not consume energy while at rest or coasting, and modern plug-in cars can capture and reuse as much as one-fifth of the energy normally lost during braking through regenerative braking. Typically, conventional gasoline engines effectively use only 15% of the fuel energy content to move the vehicle or to power accessories, and diesel engines can reach on-board efficiencies of 20%, while electric drive vehicles typically have on-board efficiencies of around 80%.