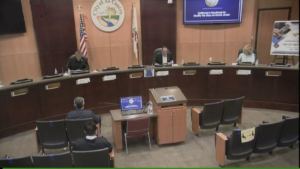 The El Centro City Council had another informative meeting in Spanish to tell the public of what is going on with COVID-19.

The meeting was held on April 17th at the El Centro City Hall where there was information provided by El Centro Regional Medical Center, El Centro Police Department and Imperial County Public Health.

El Centro Regional Medical Center CEO Adolphe Edward said they are testing people for COVID-19 but asked residents to continue with social distancing and wash their hands. Edward recommended the public to not test themselves in places that are not approved by the FDA since their outcome is not good.

“We will have a testing machine that will at El Centro Regional Medical Center so we can get more testing capability per week since right since we only get testing for 24 individuals that I have to share with pioneers,” Edward said.

Dr. Edwards asked the public to remain at home and have less than 10 people. He mentioned that families got together for Easter and they have seen an increase in the number of patients with symptoms since then.

“Let’s take care of the elderly and those that don’t have a strong immune system,” Edward said.

Jeff Lamoure from the Imperial County Health Department said that as of April 16, there are 143 total positive cases in Imperial Valley with 98 active cases. Of the total cases, 42 people have recovered and there have been three deaths.

Calexico has the highest number of COVID-19 cases with 38 infected followed by El Centro with 36 confirmed cases.

Mayor Efrain Silva asked a question from the public about people at Buckling Park walking with no face covering. The question was as to why they haven’t closed the parks since they are not essential. Lamoure said that they can walk in the park while maintaining social distancing form other people.

“People can walk on the park but it should be considered if the playground and exercise equipment will be close to the public,” Lamoure said.

Regarding face masking, Chief said that they started a campaign on social media information the public of the new requirement.

“We had 35 complaints of people not wearing face covers so we have been out and been very aggressive on warnings,” Chief Johnson said.