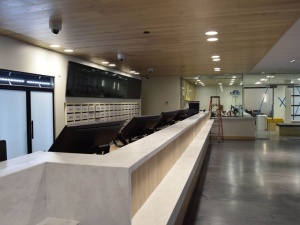 Anticipating the passing of Prop 205, which would legalize recreational marijuana use, Harvest hopes to be one of the dispensaries granted an exclusive license to sell marijuana to anybody over 21 – a license that can only come from the state. Harvest, Inc. is well poised to do so, with an existing location in Tempe and $1 million having gone into the construction of the Scottsdale location.

Even if the Proposition doesn’t pass, Harvest will still do business as usual, supplying cannabis, THC vape juice, and edibles to Arizona’s near 100,000 patients with medical marijuana cards.

The buildout of well-appointed marijuana facilities is part of a trend that marijuana advocates say helps legitimize their trade by rerouting money to the local economy – something missing from the drug transactions of the past. Medical patients can now purchase marijuana in a safe, legal way, with the state collecting tax from the sale.

The Proposition’s detractors argue that dispensaries like Harvest will make it easier for marijuana to reach the hands of underage users, citing studies on alcohol and prescription drug abuse that show underage users mostly get their supply from their homes or the homes of friends. Others say that the jury is still out as to the drug’s safety in the matters of neurological development and marijuana-related traffic accidents.

And for some, the problem with Prop 205 rests not in the plant, but in the power. Prop 205’s current wording means that the state can select which dispensaries are given a license, a competition-straining measure some see as paving the way toward a monopoly.

Nonetheless, with its track record, financial positioning, and attractive new facilities, Harvest stands to be the supplier of marijuana to the Scottsdale area. How many people that supply will reach depends on voters this November.