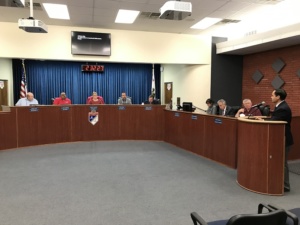 The Imperial Irrigation District Board of Directors will have a second round of the legislative fight against Assemblyman Chad Mayes who introduced legislation that would require the California Energy Commission to study and report to the legislature options for IID’s electrical service to the Coachella Valley post-2033.

Assembly Bill 2629 requires the Energy Commission, the Imperial County Local Agency Formation Commission, and the Riverside County Local Agency Formation Commission to meet for the purposes of determining the sphere of influence of the Imperial Irrigation District and options for electrical service to the Coachella Valley at the end of the 99-year lease of electrical rights in the 1934 compromise agreement between the Imperial Irrigation District and the Coachella Valley Water District. The board unanimously voted to oppose this bill.

Mayes is an Assemblyman representing the 42nd District, encompassing parts of Riverside and San Bernardino counties.

No later than June 30, 2022, the Energy Commission shall report to the legislature on the determination and options described.

This is not the first time IID and Mayes have around with each other. Mayes introduced an assembly bill that would add more members to the IID board from Coachella forever changing the balance of the board.

Assembly Bill 854 died earlier this year in the rules committee at the California State Assembly since there was not enough support for the bill to move forward. The IID Board took a strong opposition on the bill that would have required the members of the IID Board to increase from 5 to 11 members with a majority coming from Riverside County.

“While I am encouraged that AB 854 died, I am under no illusion that the issue is going to go away in that part of the IID’s energy balancing authority,” Ortega told Beyond Borders Gazette on Feb. 2nd, “The trouble is that it is a zero-sum game between the two valleys. Because the political boundaries of the IID are the irrigation service area, just as the Coachella Valley Water District’s political boundaries are within the county of Riverside,”

Director Alex Cardenas suggested bringing the Coachella Valley Water Authority into the mix since they have a contract with them.