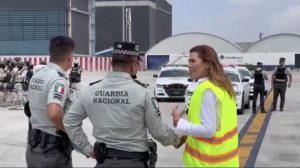 The authorities of Baja California, headed by Governor Marina del Pilar Avila Olmeda, continue to work to maintain peace in the State, as well as to restore normality after the events that occurred on the afternoon and evening of last Friday, August 12. In this sense, the Governor thanked the support and direct dialogue of the President of Mexico, Andrés Manuel López Obrador, and the entire Federal Government, for supporting the coordinated actions that are being carried out in the State.

“It is time to be united, to work without divisions, to together maintain the tranquility of all the families of Baja California,” said the Head of the Executive Power of the State.  With this objective, the Security Coordination Table remains active, which brings together all corporations in actions aimed at safeguarding tranquility.

Avila Olmeda maintained that as a result of the intelligence work, there is already an initial analysis of what happened, as well as people detained for their alleged responsibility. Therefore, the Governor stressed, that the full weight of the law will be followed.

She added that toll booths and highways in the Baja Californian territory operate normally, which adds to the collaboration with the transport sector to restore transfers and with the business community to maintain the smooth running of the economy.

“Our government and its offices are already working in their entirety. In the same way, medical services, such as clinics and hospitals, operate normally,” she explained.

Baja California Governor Marina Del Pilar welcomes the members of the Mexican military that arrived in Tijuana that will help the state combat the organized crime groups that is affecting the state.

“All the gratitude of the Baja Californians to President Andrés Manuel López Obrador and to the elements of the Army and National Guard that arrive in Baja California to reinforce the tasks that are carried out in coordination with the state and municipal authorities to guarantee the tranquility of the families of our state,” the governor stated on a recent Facebook post.

Finally, Avila Olmeda invited society to stay informed through official channels and stated that no person has the right to threaten the stability of Baja California and its population, which must be maintained with the unity and solidarity that characterizes it.

While the Governor wants to put a hopeful spin on the situation, CANACINTRA Mexicali, the organized business organization of the city, says the government strategy has failed:

“It is clear that the strategy implemented by the Federal Government and followed to the letter by the State and Municipal Governments, is not giving results and today we are prisoners of organized crime that operates with impunity in all corners of our territory without anything or nobody prevents it. For Mexicali, these terrorist acts this afternoon put the lives of many Mexicalenses in danger and took away from us the tranquility to which we were accustomed; although insecurity has been on the rise in recent months, we were not prepared for this, much less to experience a situation of simultaneous terror throughout the State.”