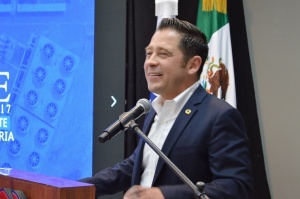 Members choose José Eugenio Lagarde Amaya as the new President of the Mexicali National Chamber of Transformation Industry (CANACINTRA) at their 73rd Annual Ordinary Assembly held yesterday in the facilities of the business organization.

The members of the Chamber met at 6:00 o’clock in the afternoon to celebrate the Annual Ordinary Assembly in which Juan Ignacio Gallego Topete, outgoing President of the organization, presented his Annual Report to all members and special guests, where he highlighted the main achievements obtained during his administration in 2017.

In his speech, Gallego Topete highlighted the participation of CANACINTRRA Mexicali in different efforts aimed at maintaining and increasing the productivity and competitiveness of industrialists, for instance the management to achieve repeal of the Water Law for the State and the work on the creation of a new initiative of law.

In parallel, he said, we took on the task of solving the shortage of gasoline that put the sector at risk in early 2017 and the latest situation regarding the rise in electricity rates for the Industrial Sector, which in coordination with the State Government and members of the private initiative, it was possible to resolve before harming the economic development of the community.

For his part, José Eugenio Lagarde Amaya, took the opportunity to acknowledge the trust placed by the membership in him and highlighted his commitment and enthusiasm in the continuity of the work of the chamber, in addition to presenting the members of the new Board of Directors of Canacintra Mexicali.