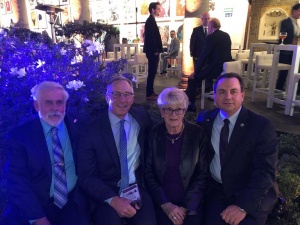 Lopez Obrador, commonly known as “AMLO,” was elected in June. He took the oath of office as Mexico’s 58th President for a six-year term on Saturday, Dec. 1, at the San Lazaro Legislative Palace in Mexico City. Mayor Nicholls attended along with a delegation of U.S. mayors, state leaders and federal dignitaries, including Vice President Mike Pence and Governor of Arizona Doug Ducey.

“Being invited to witness such a momentous event as part of the United States’ delegation is a strong testament to the relationship we have developed with local and regional communities,” Nicholls said. “Yuma’s role in the global discussion is growing.”

World leaders representing more than two dozen nations from across the globe attended the Presidential Inauguration. Mayor Nicholls attended additional events including a reception hosted by the Minister of Foreign Affairs and a Presidential Lunch after Lopez Obrador’s inauguration. In his speech, Lopez Obrador gave an overview of his platforms for his administration which include eliminating corruption in Mexico’s government and creating a border zone focusing on investment and opportunity. He made 100 promises of what he would accomplish in his six-year term before Mexican citizens.

Since his first election in 2014, Nicholls has championed strong cross-border collaboration with neighboring cities in Mexico, and promoting unity to create stronger shared economies. Together with mayors from Somerton, San Luis, San Luis Rio Colorado and Wellton, and supervisors from Yuma County, Nicholls spearheads 4FrontED, an effort to unite the megaregion near the U.S.-Mexico border to create more jobs, increase border security, boost port efficiency, and strive to attract more businesses the 4FrontED area.

Aside from San Luis Rio Colorado, Mayor Nicholls and the 4FrontED leaders have strengthened and extended cross-border relationships to collaborate with large private and public-sector partners in Mexicali, Baja California. Mayor Nicholls led an economic development summit in March 2017, focused solely on U.S-Mexico relationships and how communities can work together in regards to economic development, tourism and higher education. A memorandum of understanding (MOU) was put into place under Nicholls’ leadership in 2017 to establish a cross-collaborative relationship between 11 universities in Arizona, Baja California, and Sonora.

Nicholls was invited to welcome President Lopez Obrador in a visit to San Luis Rio Colorado earlier this year, and his invitation to attend Mexico’s Presidential Inauguration is described by Yuma’s mayor as a showcase of the momentum picking up in the 4FrontED megaregion.

“I have such pride and honor in being a border mayor,” Nicholls said. “I hope that in representing our border region at the federal and international levels, we can continue efficient work with partners in Mexico to address issues that are key right now, such as port efficiency, border security and economic development. By strengthening and building upon our historical and economic ties, we can make sure both countries work together for the betterment of people on both sides of the border in our local region.”