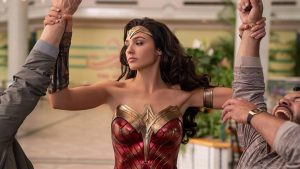 One of 2020’s last big blockbusters, Wonder Woman 1984, will simultaneously be released in theaters and on HBO Max on December 25th. A press release from Warner Bros. confirms the film will be available for one month, and premiere in theaters in international markets on December 16th.

Unlike Mulan, Wonder Woman 1984 won’t cost anything extra beyond the monthly subscription fee. HBO Max subscribers will have the opportunity to watch the film directly from home. The streaming service costs $14.99 a month. The move comes as uncertainty grows over whether theaters will remain open as COVID-19 cases surge across the United States.

In January 2019, after principal photography on Wonder Woman 1984 was completed, director and co-writer Patty Jenkins announced that the plot for a third Wonder Woman film was mapped out. The filmmaker stated that the plot of the next installment would take place during the modern-day.

By December 2019, Jenkins expressed that the wait between the second and third films will be longer than the time it took to release the first sequel. During an interview with Total Film in April 2020, the director expressed that she had a story arc that would take in all four Wonder Woman films, including an Amazons movie, and then the main character’s third movie.