In the month of March, we celebrate the International Women’s Day, in honor of it I dedicate this article to all women, to mothers, daughters, grandmothers, aunts, students, professionals, housewives, workers, teachers, to each of these women who from their position work every day for a better world. Last year, I dedicated some lines this month to explore the history of women’s rights, we valued how women fought for their rights and we identified the historical moments that set the tone for recognizing women’s rights.

This year, the year of elections in Mexico, it is appropriate to about the first right that women obtained, the right to vote. These lines are particularly devoted to discuss the history of the right to vote of women in Mexico and briefly in the United States of America (USA). 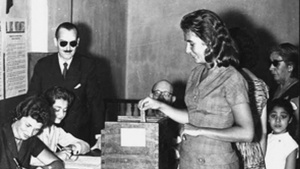 During the nineteenth century, large feminist organizations emerged that struggled to obtain the vote and political rights for women. The first antecedents in which women’s rights were obtained in connection with vote in Mexico were in 1923 in Yucatan. The State of Yucatan recognized the municipal and state vote with three women elected for deputies and one for council who left office in 1924. Other states granted the right to vote to women in 1924 in San Luis Potosi and in 1925 in Chiapas, however, this right was lost in 1925.

A notable step in women’s right to vote was in 1937 when President Lazaro Cardenas proposed an initiative to reform article 34 of the Constitution allowing women to vote. Initiative despite having been approved by both chambers of the congress and the legislatures of the states was never concluded due to the lack of computation and declaration for its validity.

The real triumph was on the year 1947 when during the presidency of Miguel Aleman, the reform of article 115 of the Constitution was published in the Official Gazette in which the participation of women in municipal elections was incorporated, in the same condition as men with the right to vote and be voted. Although the achievement was only in the municipal elections, it was a great advance since it was the first achievement in the political rights of women in the country. The women of Chiapas were the first to vote in elections by the end of 1947.

On the year 1953 the reform of articles 34 and 115 was published in which women were expressly included as citizens of the Republic, suppressing the constitutional precept that restricts the participation of women only to municipal elections, granting them the right to universal suffrage and the right to be voted for elected office, being Mexico among the last countries in Latin America to grant women the right to vote. In 1955 it was the first time that the Mexican woman cast her vote in federal elections.

On the other hand, in the US, many years before women’s right to vote were achieved in Mexico, the US already had movements seeking to achieve recognition of rights for women, such as the first Convention on the Rights of Women in New York, in the year 1848. In the year 1866, organizations were formed in order to fight the struggle for the equal rights of women in society, among which the fight for the right to universal suffrage stood out. In 1917, thanks to the work of the conventions and associations, the United States took a big step by granting the right to vote to women in New York, this led to the 1920 amendment of the 19 Amendment in which the universal vote for women was granted.

These lines are in honor of the women and all those who contributed that today we are in a society with greater equality of rights for women, however, we must recognized that there are still countries with discriminatory laws against women or laws  that denied or conditioned vote for women, we must bear in mind that we still need to continue working in favor of women’s rights in Mexico, the US and around the world. We must continue in the work of recognizing, defending and eliminating all discrimination against women or any individual, a fight that must be constant and be on the agenda of every government.

By: Jaime Israel Davila Gomez, Attorney. The gastronomy industry is often used as an easy-to-understand …