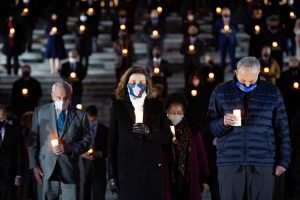 The House of Representatives voted early Saturday to pass President Joe Biden’s $1.9 trillion Covid-19 relief package, a step to implementing his vision for bringing the pandemic under control just days after the U.S. crossed the tragic milestone of 500,000 deaths.

Democrats in both chambers are aiming to approve the bill using a procedural tool known as budget reconciliation, which allows them to pass the measure with a simple majority and avoid a Republican filibuster in the Senate. Lawmakers plan to send the legislation to Biden’s desk before March 14, when key unemployment aid programs for millions are set to expire.

The plan contains a third $1,400 stimulus check for Americans earning less than $75,000 annually, increases jobless benefits to $400 a week through the end of August, expands the child tax credit to up to $3,600 per child, includes $350 billion for state and local government funding and allocates $170 billion for K-12 schools and higher education institutions to cover reopening costs.

The bill would also gradually increase the federal minimum wage to $15 per hour by 2025, a provision that will almost certainly be excluded from the Senate version after a non-partisan referee in the upper chamber ruled late Thursday night that raising the pay floor is not compliant with budget reconciliation rules.

Once the rescue package clears the House, the Senate takes up the bill and then will be forced to address the next steps on the minimum wage, which hasn’t been raised at the federal level since 2009.

In addition to addressing the public health and economic crises head-on, the President’s plan will provide emergency funding to upgrade federal information technology infrastructure and address the recent breaches of federal government data systems. This is an urgent national security issue that cannot wait.

President Biden’s $1.9 trillion American Rescue Plan is ambitious, but achievable, and will rescue the American economy and start beating the virus.

The president’s plan includes a historic investment in expanding the public health workforce. This proposal will fund 100,000 public health workers, nearly tripling the country’s community health roles. These individuals will be hired to work in their local communities to perform vital tasks like vaccine outreach and contact tracing in the near term and to transition into community health roles to build a long-term public health capacity that will help improve quality of care and reduce hospitalization for low-income and underserved communities.