Three Chambers Decide to Merge into a Regional Chamber of Commerce 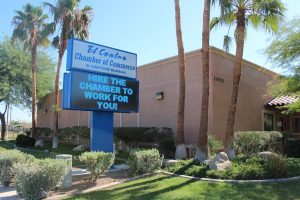 After a year of negotiations and discussions, three chambers of commerce have decided to merge to create a regional chamber of commerce in Imperial Valley.

The Westmorland Chamber, Imperial Chamber, and El Centro Chamber Boards have all voted in favor of merging chambers to form the Imperial Valley Regional Chamber of Commerce that will begin operations early next year.

“The new regional chamber is a wonderful opportunity to unite together and grow beyond our city borders,” said Committee Chair Bari Smith in a press release, “Although not all of the Valley’s chambers decided to merge at this time, the committee looks forward to welcoming them to merge with the Regional Chamber in the future.”

The executive committee will be comprised of equal representation from each chamber merging — two representatives from Westmorland Chamber, Imperial Chamber, and El Centro Chamber. They will begin meeting next week to discuss and begin implementing the logistics of the three-chamber merge. All current paid staff of the two chambers will be offered a position in the new regional chamber and the Executive Director will be chosen from the pool of existing staff.

This project intended to bring together all the chambers of commerce similar to a model that the Coachella Valley Regional Chamber of Commerce uses.

“This past year has been very tough for our chamber members and community as we’ve faced the unknowns of a pandemic that has devastated businesses across all industries. As a regional chamber we look forward to bringing together our fantastic staff, resources, and ingenuity to support our members and promote business growth throughout the Imperial Valley,” said Smith.

The Chambers of Commerce of Brawley and Calipatria decided not to join. The Calexico Chamber of Commerce closed its doors in March when the pandemic started.