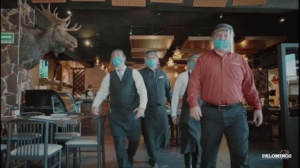 Supported by a surveillance program so that the necessary safety measures are complied with.

Mexicali, B.C.- Activities in the gastronomic sector resumed starting Friday, July 15 in Mexicali. Businesses will be operating at 25 percent of their capacity, implementing the proper safety and hygiene protocols, as stated by Mario J. Escobedo Carignan, Secretary of Sustainable Economy and Tourism in Baja California, during the virtual conference.

Baja California is still in red color with respect to the Covid-19 traffic light scheme, however, activities in the Costa Zone for the gastronomic and tourist sector have been reactivated in recent days. As demonstrated, due to the past festivities of July 4 in the neighboring country, about 130 thousand visitors were received even though tourism in the region is not being promoted.

“We are going to try to reactivate the sectors, being the most cautious, trying to avoid to detonate mobility that generates higher levels of contagion,” said the secretary. This will be done gradually and progressively working together with the Mayor, Marina del Pilar Ávila, as well as with the State Governor and in coordination with the Department of Public Health, Escobedo Carignan said. In regards to reopening hotels, gyms and shopping malls are also being reviewed.

The tourism and hotel sector has been the most affected at the state level. Five thousand 934 jobs have been lost: in the case of Ensenada, there are one thousand 176, in Mexicali one thousand 388, in Playas de Rosarito 197, in Tecate 188 and in Tijuana 2 thousand 985 in the sector. On the other hand, he commented, from January to date, 11 thousand 358 jobs have been generated in Baja California, which puts the state as the first on the list nationwide.

He added, more than 400 companies have resumed activities, which represents approximately 250 thousand jobs, however, it does not mean that this number of people returned to work, it is estimated that between 40 and 50 percent have done it, since due to safety and hygiene protocols many companies significantly reduced their number of employees.

Thus, he assured that he is working together with the mayor’s office for the reactivation of the economy in Mexicali, in such a way that support has been distributed to micro-entrepreneurs, giving up to 160 checks in seed capital and another 68 are pending to be delivered.

He also explained that efforts are being made to implement the “Youth Raising Baja California” program, which will grant two-month wages to young people who have lost their jobs in order to reintegrate them into the economic activity.

As for the resumption of activities for the most vulnerable sectors and education, they are expected to reactivate again when we are within the green color of COVID-19 lights.